Originally the Cathedral Church of Our Lady of Sorrows, Wrexham, was a Roman Catholic parish church. It was built in 1857 to replace a chapel in King Street, which still stands. The new church provided extra capacity, and was itself enlarged with the addition of a cloister and side chapel in the mid-20th century.

The church was designed by 23-year-old Edward Welby Pugin, son of the celebrated architect Augustus Welby Pugin. The design was inspired by a 14th-century style. It was commissioned by Richard Thompson (1799-1866) who, with his father and uncle, had developed the local coal and iron industries in the 19th century. In the cloister is a tomb with an effigy of Ellen Thompson, Richard’s wife, who died of cholera in 1852. 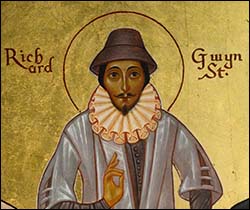 In 1898 the Diocese of Menevia – covering most of Wales – was established, and St Mary’s became the pro-cathedral, later the cathedral.

In the side chapel is a stained glass window, made at Wrexham College of Art in the 1980s, in memory of the martyr St Richard Gwyn. Born in 1536, he was a schoolmaster who refused to become a Protestant and was therefore hanged, drawn and quartered in Wrexham’s beast market in 1584. A relic of St Richard Gwyn is mounted on replica gallows in the cathedral. To its left is an icon depicting scenes of his life (detail pictured left). This was painted in 2000 and consecrated during the cathedral’s annual St Richard Gwyn memorial celebration.

Near the confessional is a plaque in memory of Flight Lieutenant David Lord, once an altar boy here. He was awarded the Victoria Cross and Distinguished Flying Cross.  He died during the attempt to bring the Second World War to an early end in 1944 with an airborne invasion at Arnhem, Netherlands. He is also commemorated at Wrexham’s Memorial Hall.

Also displayed nearby is an image (pictured right) of Our Lady of Częstochowa, presented by Polish children who took their first communion here in 2008 to 2010. It’s said that the original icon of the Black Madonna was painted by Luke the Evangelist while Mary told him the story of Jesus’ childhood. The original has been in Częstochowa, a city in southern Poland, since medieval times.

The river in Haverfordwest is so shallow today it's hard to picture vessels tying up at Old Quay, but onion ships from Brittany were still a seasonal sight there in the last century. In 1907 two onion ships arrived at the same time, sparking a fight between ...