Use the map below to find the graves of interesting people who are buried here. The numbers on the map correspond with the list below. Click on the person’s name to read about him or her. The photo of each gravestone will help you to locate the grave.

Please take care when visiting the graves, in case the ground is uneven.

Older graves can be seen in and around the Church of St Mary and St Nicholas in the town centre. By 1863 the churchyard was full, so this cemetery was created on a plot of land given to the town council by Sir Richard Bulkeley Williams-Bulkeley 10th Baronet (1801-1875). It remains in the town council’s care.

The cemetery chapel was consecrated in July 1863 by the Bishop of Bangor, James Colquhoun Campbell. Originally the cemetery was divided by religion: Church of England (later church of Wales) on the right as you enter; Non-conformists and Roman Catholics on the left; hence the twin chapels of the building.

The first burial, in January 1864, was that of retired Royal Navy gunner John Jones, whose son was governor of the county jail. As Beaumaris was still a garrison town, there are many military (militia, Royal Anglesey Royal Engineers and naval) burials in the cemetery, some of which are distinguished by fine imagery. There are eight burials listed as Commonwealth war graves: seven from the First World War and one from the Second World War.

With thanks to Bridget Geoghegan, Adrian Hughes of the Home Front Museum, Llandudno, Hazel Pierce, of The History House, and Rev Clive Hughes

Need help to find the cemetery? Click here for a map

1, Emma Henderson (d.2004) - worked for the French Resistance in WW2 until captured by the Gestapo
2, John Jones (d.1869) - governor of Anglesey jail. His ex-Navy dad also lies here, the cemetery’s first burial
3, James Arthur Davies (d.2007) - a prisoner of war in WW2, he led fundraising for Ysbyty Gwynedd equipment
4, Evan Pritchard Thomas (d.1924) - emigrated to Canada. Twice wounded in WW1. Married after returning to Beaumaris
5, John Henry Sloman (d.1922) - musician who was badly wounded while serving as an army bombing instructor
6, Mary Jones (d.1939) - lost a son in WW1 and another, a caretaker of war graves in France, during WW2
7, John Arthur Prothero (d.1945) - Metropolitan Police detective who tracked down an oil agent’s killer in the 1920s
8, Thomas Frederick Tattersall (d.1943) - made a fortune in the cotton trade and funded community facilities
9, John Lloyd Thomas (d.1913) – Deputy Surgeon General of the Royal Navy, decorated by the Chinese government 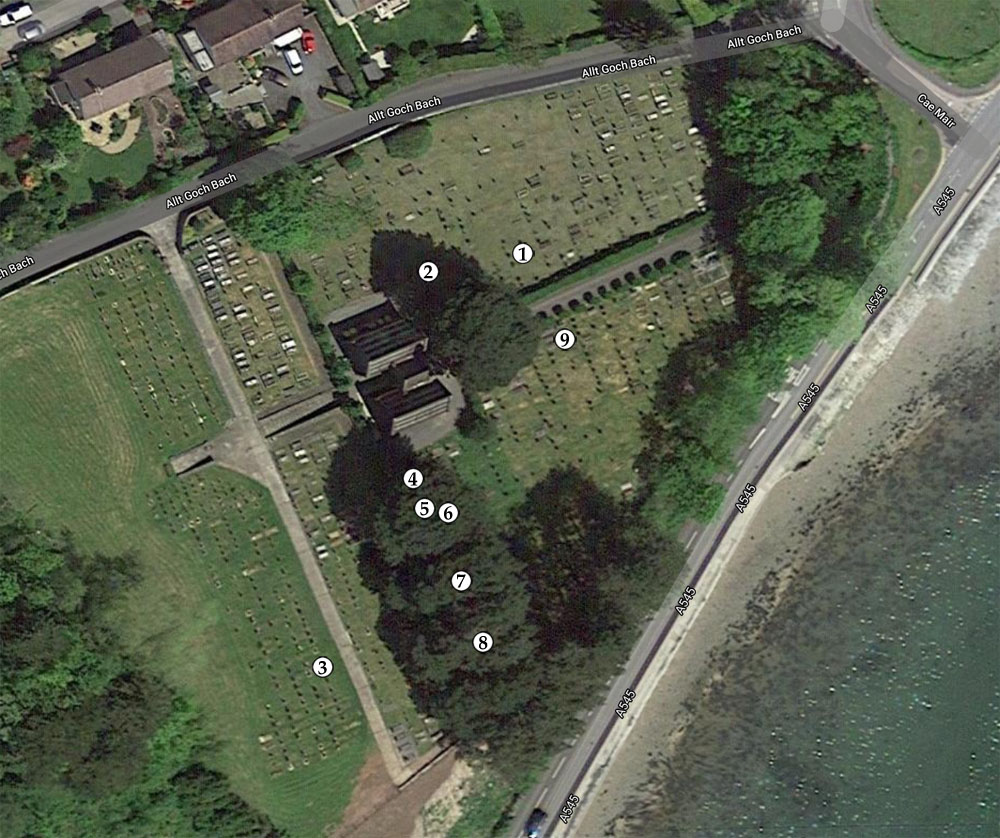