In memory of Arthur Banks 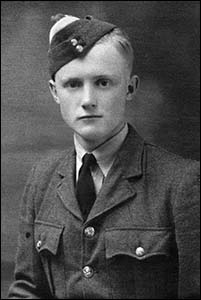 Arthur Banks was born in Llanddulas in 1923. His parents were Charles Chaplin Banks and Harriet Margaret Banks, who later lived in Cheltenham.

Arthur’s paternal grandparents, Charles and Helen Banks, ran the Arnold House private school in Llanddulas. Writer Evelyn Waugh was one of their teachers in the 1920s. One of their sons, Arthur Chaplin Banks, was killed in the First World War while a Second Lieutenant with the Royal Welsh Fusiliers.

Arthur’s father was a lieutenant with the RWF and Royal Flying Corps who received the Military Cross and Distinguished Flying Cross for his flying exploits.

During the Second World War, Arthur Banks followed his father into the skies. After training, he joined the RAF’s 112 Squadron, serving as a sergeant in Mediterranean operations. On 29 August 1944, his plane was hit over northern Italy and he crash landed. Friendly Italians passed him to the Partisans (local people who worked actively against the Fascist regime), who arranged to return him to the Allied-held part of Italy in a fishing boat. A storm on the appointed night, 7 December, forced them to postpone the journey. The whole group of 20 to 30 was betrayed and captured that night.

Over the following days, Arthur was tortured by the Germans and later by a group of Italian Fascists which included two women who wanted to be present. He endured unspeakable pain and humiliation but refused to inform on the Partisans who had helped him. Eventually he gave in and made “small admissions”, which he qualified by saying they were untrue but spoken under coercion.

The fascists dragged Arthur, by then mutilated and badly burned, to a bridge, tied a weight to his feet and pushed him off a bridge. Arthur managed to free himself and reach the riverbank, but the fascists spotted him as they returned from the bridge. Arthur was shot dead and buried in a dung hill. His official date of death is 20 December 1944.

After the war, 27 people – including an Italian doctor – were tried for their involvement in Arthur’s torture and killing. Arthur was awarded the George Cross for his bravery in refusing to yield information despite his “brutal and inhuman treatment”. His remains were interred at Argenta Gap War Cemetery, in Ferrara province.

Back to Welsh RAF history page