It’s believed that the Harp Inn was built on the site of a medieval prison. Convicts would be taken from the lock-up to the nearby stocks for public humiliation. A prison is mentioned in a description of Abergele in 1344. At one time the prison was one of the area’s few stone buildings, with timber houses for neighbours. 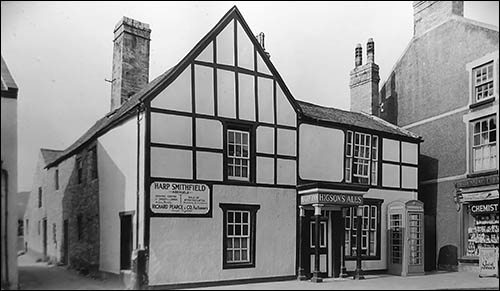 The inn dates from the boom in trade which came Abergele’s way after 1785, when the Chester to Holyhead mail and other coaches were diverted this way instead of running further inland. Innkeepers were buoyed again by an influx of tourists to North Wales after the outbreak of war against France in 1793, when wealthy British people were unable to make the usual Grand Tour of Europe. By 1862 Abergele had 16 inns, all but three of them along the main road (Market Street and Bridge Street).

Livestock auctions were held at the Harp Inn from c.1910, when growing motor traffic put an end to the earlier custom of holding markets in the main road. Auctioneer Frank Lloyd held his “Smithfield” at the Harp, and his rival Richard Pearce used the Bee Hotel, almost opposite. Buyers from as far away as Lancaster and Stafford came to the Harp Smithfield. On one day in April 1914, for example, sheep were bought here for a total of more than £1,000 (c.£100,000 in today’s money).

The Vale of Clwyd Cooperative Agricultural Society opened a branch at the Harp in 1917.

Later Richard Pearce ran the Harp Smithfield. His advert is seen on the corner of the inn in the old photo from after the Second World War. It explains that the smithfield was a grading centre for sheep and lambs. On the right of the photo is one of the windows of the Medical Hall.

The telephone kiosk outside the Harp Inn is a listed building. It was produced by the General Post Office to the K6 design of 1936.