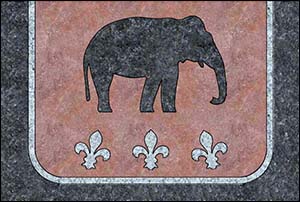 This granite postcard on the prom at Colwyn Bay recalls the mechanical baby elephant which gave holidaymakers rides along the prom in the 1950s.

The device was patented by Frank Smith of Morecambe, Lancashire, in the late 1940s after a trip to a zoo. His elephants soon went into commercial production.

The creature at Colwyn Bay ran on wheels powered by a small two-stroke petrol engine via a belt drive. Its keeper walked alongside while the children sat on benches which ran the length of the elephant’s back. The fare was 6d (six old pence). The keeper had to hold a driving licence. The elephant travelled at about 3.2kph (2mph).

Another popular ride on the prom was the miniature railway, built in the 1940s and closed in the 1980s. The tiny track ran between the railway embankment and the prom road, from the pier to the road junction below Eirias Park (where you now see the Porth Eirias watersports centre). The little carriages were pulled by a steam locomotive until it was ousted in the 1960s by an internal combustion engine, dressed up unconvincingly as a steam loco.