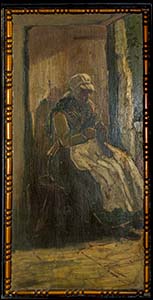 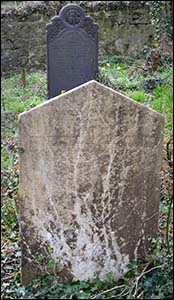 Buckley Ousey was a painter and member of the Royal Cambrian Academy of Art, based in Conwy. Members and associates of the RCA paid for his gravestone after his early death, aged 37, in 1889. He left a widow and six children.

Buckley hailed from Stalybridge, near Manchester. In 1884 he settled with relatives in Rowen. Thomas Dutton, of the Belle Vue Hotel in Trefriw, became one of his main patrons. Eventually the hotel's walls were “covered with the works of Mr Ousey”.

From 1885 Buckley studied art in Antwerp, Belgium, for 18 months. He suffered poor health, and by the time he settled in Conwy in 1887 he probably knew that he was dying. Sarah Dutton, proprietor of the Castle Hotel in Conwy, commissioned him to create paintings. Many can still be admired today in their original settings – on furniture and on the door panels of the public rooms. They are probably the largest collection of his work available on public view. The door-panel painting on the right is shown here by kind permission of the Castle Hotel.

Conwy Town Council’s art collection, in the Guildhall, includes several of his watercolours, including the depiction of Conwy quay in 1886 shown here, by kind permission of the council. 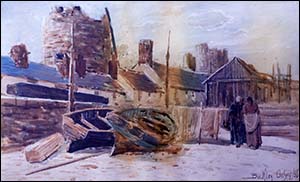 thanks to Will Swales