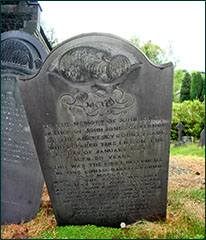 John Jones was governor of Anglesey County Gaol for 20 years. The jail building still stands and is open to visitors.

His father, also named John, was buried here in 1864, aged 83. As noted on the headstone, John senior was the first person to be buried in the cemetery. He had served as a Royal Navy gunner, being involved in the British capture of Copenhagen in 1807 – an action which prevented Denmark siding with Napoleon.

His widow Margaret was matron of the jail in Beaumaris. She died in 1868, aged 77.

Their son John outlived them only briefly. He had begun his career as a warder in Liverpool Borough Gaol in 1835. He was promoted several times before beating more than 50 rival candidates to become governor of Anglesey’s jail. He was noted for his kindness, lack of ostentation and his strict attention to his job.

The jail’s many inmates in his time as governor included Richard Rowlands, convicted of murdering his father in law, farmer Richard Williams of Llanfaethlu. Many well-dressed people from across Caernarfonshire travelled to Beaumaris to watch Rowlands being hanged outside the jail in 1862.

Magistrates were so keen to retain John’s services that they arranged for him to go to Liverpool for a cataract operation, to cure his failing eyesight. However, John was also suffering from other problems and died suddenly, aged 57, before having the operation. Local traders were among the hundreds of people who turned out for his funeral.