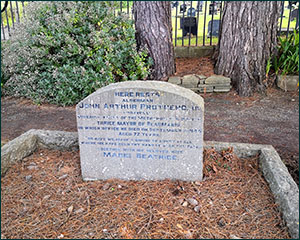 Alderman John Prothero died while in office as Mayor of Beaumaris. He had served for 34 years in the Metropolitan Police.

Policing was very much in the blood. John’s father, Lewis Prothero, was Chief Constable of Anglesey. At the time of John’s death in September 1945, his brother, Robert Humphrey Prothero, held that role.

John Prothero became one of Scotland Yard’s most effective detectives. His polished manner earned him the nickname “Gentleman Jack”.

Perhaps his most famous case was catching the murderer of oil agent Vivian Messiter, whose badly decomposed body was found in a Southampton garage in 1928. John eventually tracked down a known Manchester fraudster, William Henry Podmore. Podmore was tried at Winchester Assizes, found guilty of the crime and hanged in April 1930.

When John was appointed Superintendent of the Greenwich Division in 1931, it was the first time a ‘plainclothes’ officer had been engaged in this role since 1893, as all previous incumbents since Victorian times had been ‘uniformed’ officers.

John retired from the Met in 1936 and returned to his native Anglesey, living at a property on Rosemary Lane called ‘Old Barracks’. He busied himself in local politics and during the Second World War formed a vigilance committee to keep a check on black-market racketeering on the island. He served as Mayor of Beaumaris for three years before he died, aged 73 years.