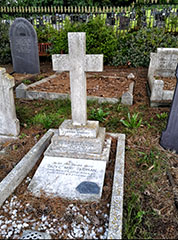 John Henry Sloman was a Sapper with the Royal Anglesey Royal Engineers during the First World War. He was accidentally wounded in 1917 and died in 1922, aged 35.

John came to Beaumaris to work on the town’s lifeboat slipway. In 1915 he married Olive Mary Roberts of Ogwen View, Rosemary Lane, Beaumaris. They had three children and lived in New Street. They were  a musical couple. John would later play the piano to entertain fellow soldiers.

He enlisted in the army in December 1915 and was based at Kingsbridge army depot in Llanfaes, near Beaumaris. By October 1916 he was an Acting Lance-Corporal.

While acting as a bombing instructor in February 1917, John was injured when a grenade landed near him. Shrapnel was removed from the back of his head. His hearing was damaged, and he was declared medically unfit for the front line.

His death is not recognised as a war death by the Commonwealth War Graves Commission, as it occurred after the date when deaths were no longer attributed to the effects of war. However, John is commemorated on the North Wales Heroes’ Memorial in Bangor.

Olive lived for almost 50 years after John’s death, and was buried here in 1971.