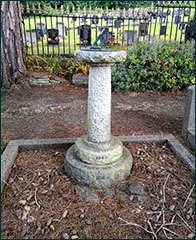 This unusual headstone, in the form of a sundial, commemorates businessman Thomas Tattersall and his wife Helen May (known as May).

Thomas was born in 1869 and brought up in Manchester. He made his fortune in the cotton trade. May (nee Newbigging) was born in 1871 in Pernambuco, Brazil, where her father worked as a civil engineer.  The couple married in 1898 in Altrincham and were living in Hale in 1904.

At the time of the First World War, they were living at Benarth Hall, beside the Conwy Estuary south of Conwy Castle. Thomas served on the committees of the North Wales Fisheries Association and the North Wales Advertising Board, which promoted the region to visitors.

After the war, the couple used some of their wealth to help the local community. In 1919 Thomas purchased Conwy’s old Constitutional Club and granted it to local people as a social club. He funded adaptations for its new role.  He also bought the Old College in Conwy and gifted it to the local council to house the town’s higher elementary school.

Thomas, a magistrate, became a Sheriff of Caernarvonshire, and High Sheriff in 1920. By 1937 he and May had moved to Beaumaris. He was still a company director. The couple lived at Woodgarth. May died in 1940.

Thomas became Mayor of Beaumaris in 1942 but died while holding that office, in February 1943. A public funeral service was held at the chapel of Bluecoat School, followed by a private one in the cemetery.