This natural harbour was transformed in the early 20th century through investment by the Great Western Railway. Previously it had the stone pier visible in the 1814 drawing, shown here courtesy of Llyfrgell Genedlaethol Cymru – the National Library of Wales. 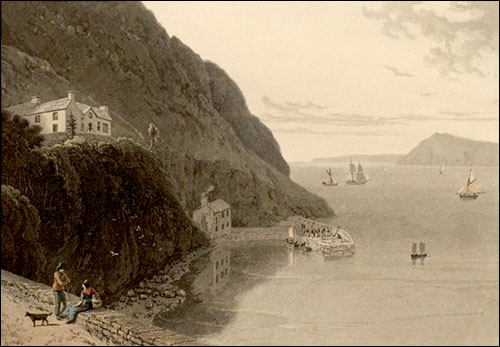 It was protected by a fort to the east after an American privateer attacked Fishguard in 1779. When a French invasion force tried to land here in 1797, the commanders were deterred by blanks fired from the fort and landed instead at Llanwnda, to the west. The French surrendered two days later, here at Goodwick beach.

The GWR operated its Irish Sea ferries from Neyland until they switched in 1906 to the Fishguard to Rosslare route, which was 45% shorter and continues to operate. This followed major investment here and to improve the associated railways, including a faster route past Swansea and new sections of route south of Fishguard.

To create space for the new quay, station and sidings, huge volumes of rock were blasted from the slope on the west. Parliament authorised the work in 1899 but progress was slow until millionaire engineer William Treglown was brought in from America to blast much bigger volumes. He was knocked down by a locomotive on the construction site in 1902. The engine passed over him but he suffered only two broken ribs and bruising.

The fallen rock was used for the quay and two breakwaters. The north breakwater is bigger than it looks, as the seabed is c.20 metres below the surface! The smaller breakwater bisects Goodwick beach, where horses were raced in Victorian times. The old photo shows the harbour with steamships in the 1930s.

The Rosslare ferries didn’t need such a big port but the GWR planned that ocean liners would depart from here for America. The ferries’ economic boost to Fishguard was so great that the GWR built c.150 houses in Goodwick, including a “harbour village”, for staff and their families. The local station in Goodwick closed in 1964 and reopened in 2012.