This shop is home to one of Britain’s oldest family-owned jewellery businesses, founded in 1796 by Bisley Henry Munt. Since then, the first-born son in every generation has been named Bisley! Each was distinguished by their middle name. Many of them were makers and repairers of watches and clocks, as well as jewellers. 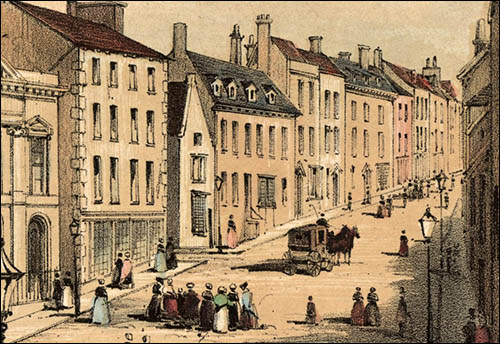 It’s thought that the ornate shop window and the clock above were installed c.1880 when a later Bisley Henry Munt made major changes to the shop he’d recently inherited. The frontage is newer than the building behind, which may be medieval.

The previous shop front is visible in the drawing, shown here courtesy of Llyfrgell Genedlaethol Cymru – the National Library of Wales. It’s part of a larger image and shows the lower High Street in the early 19th century. The Munt shop is the third building from the left. 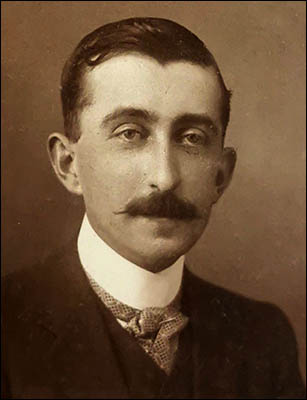 The Munt family came to Pembrokeshire from Buckinghamshire and remained interested in country pursuits down the generations. At the North Pembroke Cattle Show in 1904, a pony which Bisley Henry Munt (pictured) was riding fell and rolled on top of him. He was unconscious when rescued.

He was injured again when he intervened at a show-jumping event in 1915. A horse was refusing to take one of the jumps, so Henry walked up behind it and tapped it with a stick. The horse kicked him, “inflicting a nasty cut”. After attention from a doctor, Henry was able to take part in the horse-driving competition later.

His son Bisley John Munt followed him into the business and supplied the new mayoral chain for St Davids in 1994, when St Davids became a city.