This building was opened in 1840 as a combined town hall and market hall. The market space was on the ground floor, with a council chamber and offices above. The town hall remains the home of Flint Town Council.

It was designed by John Welch, who hailed from Overton, near Wrexham. He had worked on the Isle of Man before moving to St Asaph in 1838. 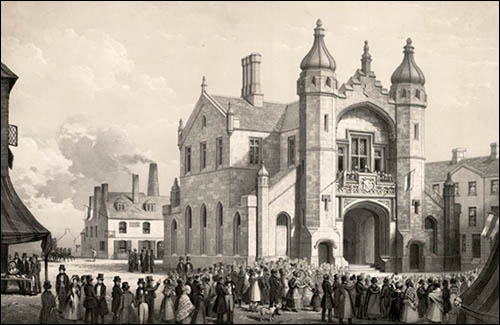 The engraving from 1840 is shown here courtesy of Llyfrgell Genedlaethol Cymru – the National Library of Wales. It may depict the hall’s opening ceremony, with a speech being given from the balcony and a temporary awnings to each side.

The town hall was a venue for inquests, court cases, political meetings, concerts and other events. Election results were read out from the balcony to crowds below. In 1914 an inquiry was held here into poor school attendance by Flintshire’s children, many of whom were “running about the streets” instead of studying.

Inside are portraits of figures from Flint’s history including Sir Roger Mostyn (1673-1734), MP for Flintshire and Constable of Flint Castle. There’s also a portrait of Richard Muspratt, whose chemical works was a major local employer in Victorian times. He and two of his descendants were mayors of Flint. The nearby Oddfellows Hall was built on land belonging to Trelawny House, the family home.

Also displayed is a portrait of Lieutenant Corporal Francis Evans, killed in action in the Gulf War in 1991. He was 25 years old. His father Ted, who worked at the Courtaulds factory in Flint, was a town councillor.

In 2022 a purple plaque was placed on the town hall to commemorate Eirene White MP.