The footpath east of All Saints’ Church in Deganwy is known as Betty’s Path after Betty Mills, who kept an illustrated diary of her walks along the path for 12 months from August 1989. Her detailed pencil drawings depict flowers, leaves and berries of scores of species – see our video below for a selection. In 2010 Betty gave the diary to the Deganwy History Group, which adopted the path in 2020. 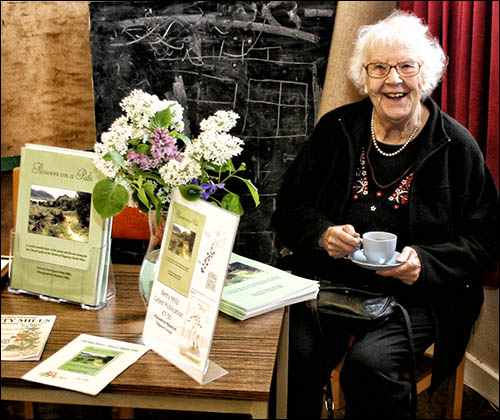 Betty was born in 1922 in Edgbaston, Birmingham. She spent much time as a child with her grandfather Charles Denning, an accomplished artist. He inspired her to draw. She studied at Birmingham College of Art before serving as an aircraft inspector in Coventry in the Second World War.

Later she lectured in fashion design in Loughborough, where she met Maurice Mills. They married in 1951 and lived in a houseboat Maurice built using ex-army pontoons. From 1959-76 Betty worked for a company which made fashion clothing, especially woollens, for Marks & Spencer. The couple retired to North Wales, living in a series of places including Park Lodge, Deganwy.

Betty published books of wildlife pictures. Her other works included embroidered cloths for church altars and a wall hanging for St David’s Hospice, Llandudno, where she was a volunteer. She donated pictures of flowers from the bible to Peniel Chapel, Deganwy. She was an enthusiastic supporter of Pensychnant Conservation Centre for 22 years, selling works to raise funds. She held a retrospective exhibition there in 2012. She died in 2018.

Her Deganwy footpath diary, titled Flowers on a Path, was the first of her wildflower journals. In the preface, she wrote: “To walk along the path between the kissing gates at any time of the year is to be delighted and entranced not only by the views of the Conwy Estuary and the mountains of the Carneddau beyond, but, more especially, by the extraordinary variety of plants and wild flowers – some of them quite rare – which grow in the area.”

She feared that houses would be built on the land here, and intended her diary to be a permanent record of the wildlife. The photo shows her with copies of the book on sale.