The village of Maentwrog takes its name from a stone you can see near the entrance to this church, which is dedicated to St Twrog. 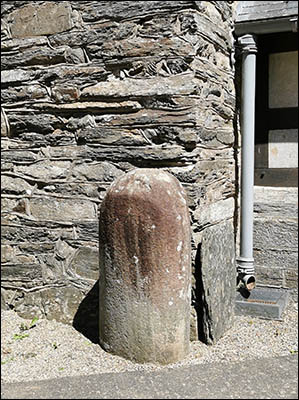 Twrog came to Wales from Brittany in the 6th century. He is also commemorated in the names of Llandwrog (near Caernarfon) and Bodwrog (Anglesey). It’s thought that he established a cell here. According to legend, he destroyed a pagan altar here by hurling a stone (pictured) from the Moelwynau mountains to the north – and his handprints were visible on the stone.

In the ancient Mabinogi legends, Pryderi, a lord from South Wales, was buried at Maen Tyfiawg – possibly Maentwrog – after his rival Gwydion killed him with the help of magic.

From 1572 to 1624 the rector here was Edmund Prys, who helped William Morgan to translate the bible into Welsh. He later produced the first book of psalms in Welsh, in 1621. The book included tunes for singing the psalms, making it probably the first Welsh book to feature printed music. A fragment of Edmund’s pulpit survives here. He is depicted on the bible translators’ memorial outside St Asaph Cathedral.

The current church was built in 1814, replacing a medieval one. It was reopened in November 1896 after extensive rebuilding and the addition of a chancel. The rebuilding was funded by William and Mary Oakeley of Plas Tan y Bwlch. Some of the carvings are by Mary. The church bell was moved to the village school and replaced with eight tubular bells. A new west window was installed in memory of Edmund. The east window depicts St Twrog.

There are memorials to the Oakeley family inside and outside the church. A tablet inside commemorates parishioners who died in the First World War. They are also named on the village war memorial, opposite the church lychgate.