The twist at the foot of Station Road is a relic of the time when the road crossed over the Glamorganshire Canal here. Until the canal was filled in and the road widened after the Second World War, there was almost a right angle bend on the north side of the canal bridge.

The bus stop by the former Cow & Snuffers pub (now Disraeli House) is on the filled-in canal, which continued past the back of the pub and behind a row of cottages. The alley south of the former pub leads to the cottages. Newer housing has obliterated all traces of the canal on this side of the road. 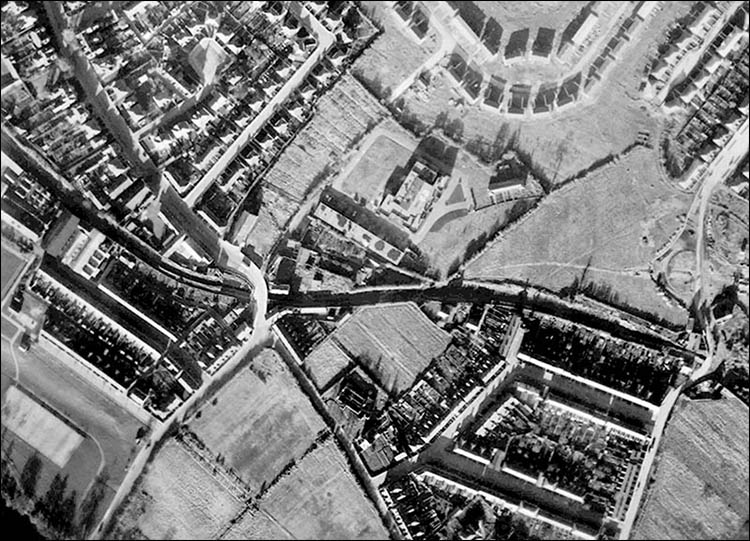 On the opposite side of the road bridge the canal entered a lock, sometimes known as the Cow & Snuffers lock. Boats were raised there before continuing towards Pontypridd, past the back gardens of houses on the north side of Andrew’s Road.

There was another lock a little downstream (north of Watson Road), in the area known as Llandaff Yard. The 1947 aerial photo, courtesy of the Welsh Government, shows the Cow & Snuffers lock and bridge left of centre and the Llandaff Yard lock on the right.

As house building in the area accelerated in the 1890s, accidents along the canal increased. In July 1900 six-year-old John Bowen, of Llandaff Yard, was playing on the towpath near one of the locks when he saw an apple floating by. He knelt down and reached out for it but fell in and drowned. His inquest jury asked entrepreneur Solomon Andrews, who owned the nearby houses, to provide better protection in the vicinity.

Another six-year-old, Joel Rees, was crushed at the Cow & Snuffers lock in 1895 when the lock-keeper, unaware that Joel was playing there, started opening the lock gates. The boy was taken to hospital but died of internal injuries three days later.

In April 1909 the body of George Church, 51, was pulled out of the canal behind the Cow & Snuffers. He had worked in the Taff Vale Railway’s electrical department but went missing in March.