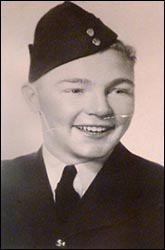 This memorial commemorates a young Canadian airman who came to Britain to help the defence against Nazi invasion. Ivan Raymond Trafford, a Sergeant Pilot, died when his fighter plane crashed near this spot during a training flight on 7 November 1941. He was 20 years old.

The exact location of the crash is a little further up the hill, to the east of the memorial.

Ivan was born at East Centreville, New Brunswick, on 11 April 1921. His parents Clinton and Gladys were farmers. He was educated in Florenceville before studying forestry engineering at the University of Brunswick. There he joined the officer training corps, gaining qualifications to be a Second Lieutenant in the heavy artillery.

Ivan interrupted his studies to join the Royal Canadian Air Force in October 1940. After training in Dunnville, Ontario, and in England, he was sent to the RAF training base at Llandow, Vale of Glamorgan.

In his last letter home, penned in October 1941, he wrote: “If I must pay the big price it will be OK. I will be happy and feel highly honoured to know that I, just one fifth of the family, was the one chosen, and that I was ready and capable of paying the necessary price for the guarantee of the other four fifths of the family’s future freedom and happiness.”

On 15 October, Ivan damaged a Spitfire after approaching the Llandow runway too high. At the time he had flown Spitfires for only 90 minutes in total, but had flown 91 hours solo on all types of aircraft.

In good weather on 7 November 1941, he began a one-hour training flight in a Supermarine Spitfire which consisted of 45 minutes’ formation flying followed by 15 minutes’ individual aerobatics. At 12.50pm he crashed into Cefncarnau, on Caerphilly Mountain. The official investigation concluded that he climbed steeply after low flying and stalled at the top of the climb. The engine cut out and the aircraft spun, bursting into flames on impact with the ground.

Ivan’s body was taken to Caerphilly Miners’ Hospital. He was buried in Llantwit Major.

The idea for the memorial took root after Harry Lewis and Matthew Ferris found a police report on the accident in the Glamorgan Archives. Harry Lewis was a schoolboy in 1941, and died in 2010. Mr Ferris, a teacher at St Martin’s School in Caerphilly, took the project forward to completion, with the help of the Caerphilly branch of the Royal British Legion. The memorial features a replica Spitfire propeller, mounted on stone reclaimed from a local primary school.

A Canadian coin which had been found at the crash site was given to David Trafford, Ivan’s nephew, in 2022.

With thanks to Matthew Ferris and Phillip Jones

Now you can phone hymn

Aug 1, 2012 The chip shop on Beach Road, Bangor, is the birthplace of a noted composer of rousing Welsh hymns ... [More]

Drinking a bottle of milk underwater