This clifftop reserve is one of the best places in North Wales to watch seabirds, as well as offering some of the region’s most dramatic coastal scenery. 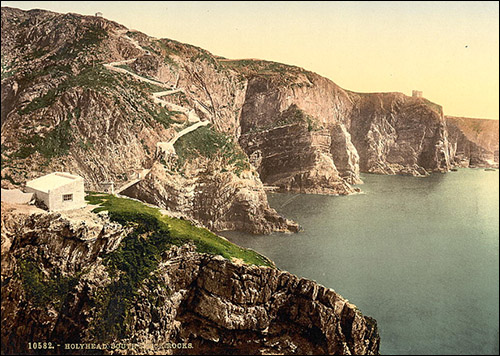 During the summer nesting season, visitors can learn more about the birdlife - and watch some of it through powerful telescopes – at the RSPB’s centre in Ellin’s Tower. The crenellated building dates from 1868 and was built by local MP William Owen Stanley, later the Lord Lieutenant of Anglesey, as a summer house for his wife Ellin.

The photo was taken from the beside lighthouse in the 1890s. You can see Ellin’s Tower on the skyline on the right.

The historian and naturalist Thomas Pennant visited the area in the 1770s and afterwards wrote that the eggs of seabirds – including peregrine falcons, shags, herons, razorbills and guillemots – were sought after for food. The egg collector was lowered from the clifftops by a rope held by one or more other people. Once the descending man’s weight had pulled the rope holder over the edge of the cliff, and both men fell to their deaths.

One of the main species of interest at South Stack throughout the year is the chough, a rare member of the crow family which you can easily recognise by its red beak and legs. Look out for choughs in the fields near the visitor centre.

South Stack reserve is a blaze of colour in spring and summer, thanks to flowers such as thrift and sea campion. Spatulate fleawort, which produces small yellow flowers, is unique to the cliffs of Holy Island, as is spotted-rock rose, Anglesey’s county flower.

The path down to South Stack lighthouse offers a splendid view of the twisted strata of the cliffs. Some of the rocks date pre-date the Cambrian era, which started 570 million years ago.

Inland from the visitor centre lie the remains of prehistoric settlements, including the hillfort of Caer y Twr, on Holyhead Mountain. Closer to South Stack are the remains of Iron Age huts, and terraced farmland, known as the Tŷ Mawr huts, or Cytiau’r Gwyddelod (“Irish people’s huts”). Excavations have suggested that structures in the vicinity were used by the Romans and perhaps formed part of their defences in northern Anglesey, which had rich copper deposits.