The signs at this station display the longest place-name in Europe:
Llanfairpwllgwyngyllgogerychwyrndrobwllllantysiliogogogoch

To hear how to pronounce the name at normal speed, press play:Or, download mp3 (60KB)

To hear how to pronounce the name slowly, press play:Or, download mp3 (100KB)

This page
sponsored by:

The destination for
self-catering
holidays in
North Wales 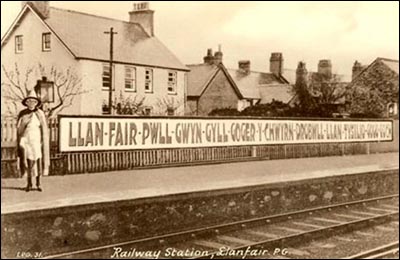 How did such a strange name come into being? The story goes back to the opening of the rail station at Llanfair Pwllgwyngyll in August 1848, as the temporary terminus of the new railway from Holyhead. Passengers alighted here for the ferry across the Menai, then continued their train journeys from Bangor station (on the mainland). The village prospered from its status as a rail terminus and from construction works nearby on the Britannia Bridge. Once the bridge had opened, in May 1850, there was no longer any need for long-distance trains to stop at Llanfair Pwllgwyngyll, which became a railway backwater overnight.

A local committee was convened to think of ways to encourage passengers to alight in the village, and came up with the idea of extending the village’s five-syllable name to create the world’s longest place name. The railway company went along with the ploy, and displayed the new name on the station.

The station closed in 1966 but reopened to passengers in 1973. Today trains call at Llanfairpwll throughout the day, running to Chester and on to Birmingham or Cardiff.

FOOTNOTES: What does the long name mean?