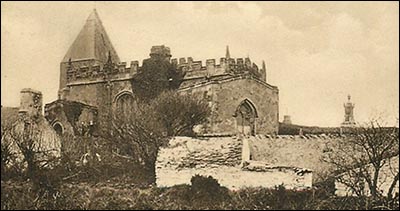 This is one of North Wales’ best preserved medieval churches. It is Grade 1 listed and features an unusual ochre-coloured tower with a pyramidal roof.

The original church here was built and richly endowed in honour of St Eilian c.450 AD by Caswallon Lawhir (Caswallon of the long hand), an eminent Cambrian Prince. The earliest surviving masonry, forming the tower, dates from 1175 to the 15th century.

A 14th-century stone chapel, known as Capel Caswallon, is linked to the church by a passage which is accessible from the sanctuary. It measures 4.4 x 3.7 metres.

The church was repaired in 1929. A major but non-intrusive restoration was completed in 2002. 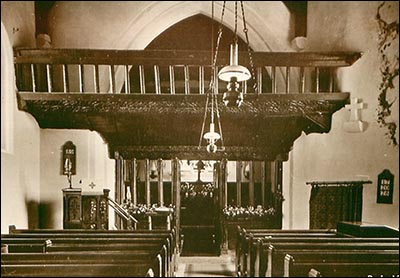 Inside is a carved wooden chest known as Cyff Eilian, dated 1667, for safekeeping of pilgrims’ offerings. The rood screen (1496) features a painting of a skeleton with hoofed feet and a banner above proclaiming: “Colyn angau yw pechod” (Sin is the sting of death). Another outline on the rood screen could be an image of Christ’s face similar to that which, by tradition, was imprinted on Veronica’s Veil, a cloth used to wipe Christ’s face as he walked to his place of crucifixion. If the identification is correct, then this is the only surviving medieval treatment of this particular iconographic image in Wales.

This image is apt for Llaneilian because a bard in the late 16th century said St Eilian came from Rome in the late 5th or early 6th century. The Venicle (the image of Christ’s face on the veil) was a symbol of the Roman pilgrimage. It was copied in minature on metal or vellum pilgrimage tokens, and sold to pilgrims in Rome during this period.

Also in the church is a pair of wooden dog tongs, from 1748, for expelling unruly dogs during services.

Slate slabs in the churchyard mark the graves of many captains of Victorian ships and of the first and last keepers of Point Lynas Lighthouse.

The Festival of St Eilian is celebrated on 13 February. The ruins of St Eilian’s Well can be found about 800 metres to the north-west, adjacent to the Wales Coast Path.

With thanks to Roy Ashworth