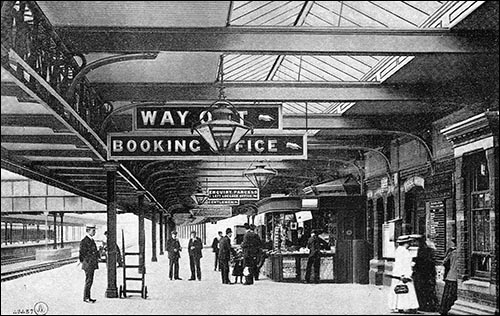 The width of the platforms here might give you an idea of how busy Rhyl station was when trains brought crowds of summer holidaymakers and daytrippers to the resort. And the platform for westbound trains was twice as wide as it is now!

The station building was erected for the opening on 1 May 1848 of the Chester & Holyhead Railway, and was later adapted as the station grew. The London & North Western Railway completed a major station enlargement in 1900 which included a new footbridge, water-powered luggage lifts and new signal boxes at each end of the station, both still standing but disused. In the station’s south-west corner, a dead-end “bay platform” was inset into the main platform for trains shuttling between Rhyl, Denbigh and Corwen.

In 1860 the rival Great Western Railway made a bid to reach Rhyl, where it would have built its own station, via Denbigh. In the event, the LNWR took over the Vale of Clwyd Railway instead. 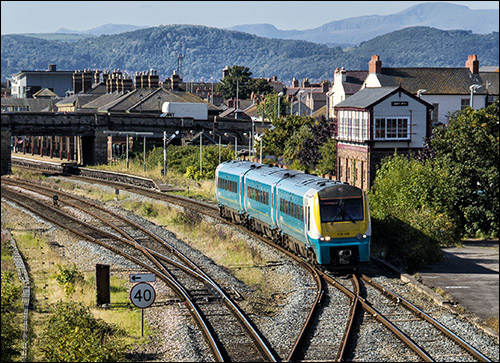 Rhyl’s first station master, Thomas Winston (1815-1889), was involved in many of the town’s causes. His father, a vicar, had inherited slaves and Caribbean estates and built a large house in Rhyl.

Thomas helped raise funds to build St Thomas’ Church and was a director of Rhyl Promenade Pier Co, the local gas company and Rhyl Cocoa House Co (providing alcohol-free venues for people to socialise). He gave the town a water trough so that horses and dogs wouldn’t go thirsty at the market premises in Queen Street. The trough is now at Bodrhyddan Hall, near Rhuddlan. After retiring in 1859, he went to the station booking office on 1 May each year to sell a ticket to a passenger, to commemorate the time he sold Rhyl’s first train ticket. Railway staff carried his coffin for his funeral at St Thomas' Church. He is buried at Morley Road Park, which is alongside his beloved railway.

One evening in January 1890 there was excitement when the station’s lamp room, containing stores of oil, went up in flames – just when Rhyl’s fire engine had all four wheels removed while it underwent repairs at the blacksmith’s.

During the British Rail era, the tracks through Rhyl were reduced to just three. In the 1980s a miniature steam locomotive, built in Rhyl in 1930, was displayed at the station after the town council bought it at a London auction.