This building, now occupied by Gap Personnel, was originally the hall of the Loyal Flint Castle Lodge of Oddfellows. It was formally opened in March 1894. It was built on part of the land of Trelawny House, home of the wealthy Muspratt family at the time. 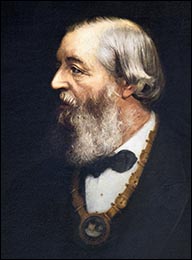 Richard Muspratt was one of the founders of the Muspratt Bros & Huntley company, whose chemical works opened in 1852 and produced sodium carbonate alkali for the textile, soap, glass and other industries. Richard (pictured right from his portrait in the town hall) was mayor of Flint for many years and died in 1885.

Two of his descendants also became mayors. One of them, Sidney Knowles Muspratt, was made an honorary member of the local lodge in a ceremony at the Oddfellows’ Hall in 1897.

The Oddfellows began as a friendly society, long before the welfare state. Members helped each other in times of need. For example, a Flint saddler called Morgan received a pension of 2 shillings a week from the Oddfellows before he died, aged 86, in 1898.

In 1810 the Manchester district of the Grand United Order of Odd Fellows broke away to form an independent order known as the “Manchester Unity”. If you look up to the roof of the Oddfellows’ Hall you’ll see the letters M and U above the date 1893.

The Flint Castle Lodge was founded in 1839. Its headquarters was at the Raven Inn for 19 years until 1884, when it moved to the King’s Head Inn.

One lodge member was Private Bert Parry of the Ship Hotel, who served in the South African War and died, aged 20, in Johannesburg in 1900. Another member was Robert Ellis Johnson, who joined as a youth. He became a foreman at the alkali works before running the King’s Head Inn. He died aged 44 in 1913. Another member at this time was journalist Thomas Chambers, who wrote for the Chester Guardian, Daily Post, North Wales Pioneer and Daily Mail, among others, and died aged 56 in 1919.

The hall was used for many other groups and activities. Local events organised by the lodge included an annual sports day.