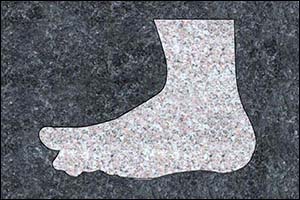 This granite postcard on the prom at Colwyn Bay relates to actor and author Terry Jones, best known as one of the cast of the Monty Python comedy programmes broadcast by the BBC in the 1960s and 1970s.

Terry was born in 1942 at his maternal grandparents' house in Dolwen Road, Old Colwyn. Terry lived there with his mother and brother through the rest of the Second World War.

While studying at St Edmund Hall (an Oxford University college) he performed in theatre shows alongside Michael Palin, who was also to become one the Monty Python stars.

Monty Python transformed television comedy with their series of half-hour sketch shows, Monty Python’s Flying Circus. The granite postcard on the prom depicts the foot which stamps down at the close of the programme’s opening animation sequence.

Monty Python also made four films. One of Terry’s most famous lines was: “He’s not the Messiah. He’s a very naughty boy!” – uttered as mother of the eponymous hero of the 1979 film Life of Brian.

He also worked as a screenwriter, film director and author of books for adults and children. History is prominent in his books, which include The Saga of Erik the Viking (1983) and Chaucer's Knight: Portrait of a Medieval Mercenary (1994). His film credits include the screenplay for Labyrinth (1986), starring David Bowie.

Terry was diagnosed with dementia in 2016 and died in January 2020.