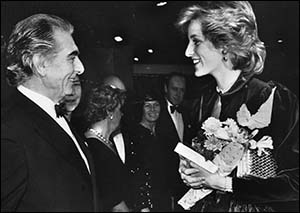 This bust of Princess Diana was created by Welsh sculptor Robert Thomas. It was completed in 1987 and presented to the city of Cardiff by members of the House of Lords on 21 July 1989.

Diana Spencer was born in 1961 at Park House, on the Queen’s Sandringham estate in Norfolk. Her father, Earl Spencer, had been an equerry to King George VI. She married Prince Charles in 1981. The couple had two sons, William, born in 1982, and Harry, born in 1984. They separated in 1992. 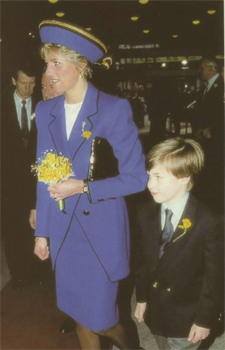 Princess Diana visited St David’s Hall several times. The photo above shows her at the Hall, meeting opera singer Sir Geraint Evans (1922-1992), who came from Cilfynydd, near Pontypridd. On 1 March 1991 she brought Prince William to the Hall with her, on his first public engagement (photo on the left).

She died in a car crash in Paris in 1997. She was 36 years old, and news of her death shocked people in Britain and overseas.

Robert Thomas (1926-1999) hailed from Cwmparc, Rhondda. His other works include the full-length statue of Aneurin Bevan, founder of the National Health Service, in Queen Street, Cardiff. Two months after his death in 1999, his statue of engineer Isambard Kingdom Brunel was unveiled by Prince Charles in Neyland, Pembrokeshire.