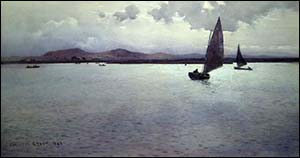 Marine Lake is North Wales’ only salt-water lake – fed from the nearby estuary. It was opened on 24 May 1895, which was Queen Victoria’s birthday. Rhyl Urban District Council informed by telegram that it had made this “the occasion for turning water into their new Marine Lake in honour of Her Majesty”.

The culvert at the railway bridge was opened in the morning and the water started to flow into the lake. In the evening the three valves at the Foryd Bridge culvert were also opened. A regatta, aquatic fete and gala were held on 6 July and described in the local press as one of the most successful days in the town’s history.

The lake covers 0.16sq km (40 acres) and is 1.2m (4ft) deep. Previously the river Clwyd would flood this land at high tide, leaving a muddy bog at ebb. The land was known locally as the “mud-hole”! The council bought it from the Commissioners of Woods and Forests for £1,050. The lake, island and surrounding ornamental grounds cost a further £10,200 and were designed by Baldwin Latham. Contractor George Law of Kidderminster constructed them in less than six months. 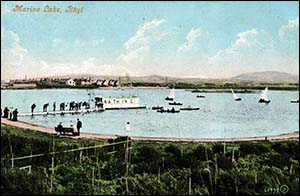 The lake became home to Rhyl Swimming Club in 1896. It was also used for rowing, sailing and yachting.

The watercolour of Marine Lake, above right, is dated 1898 and is by Carleton Grant (1860-1930). It’s reproduced here by kind permission of The Maas Gallery, London. The artist gave it the title A Grey Day and noted that it shows the view east “from the bridge”.

The Rhyl Amusement Company took over Marine Lake in 1910 and developed fairground rides along part of the shore. In June 1914 Alfred John Nightingale, a visitor from Bala, was killed in an accident on the water chute. The mechanism which raised the boats malfunctioned and Mr Nightingale, aged 27, fell to his death.

The miniature railway around the lake opened in 1911 and is now Britain’s oldest such railway. The lake continues to host activities for visitors and local groups, such as Rhyl Yacht Club and the Ocean Beach Water Ski Club.

Jun 1, 2012 Climbers always want to go higher, so it's not surprising that the first men to reach the summit of Everest ... [More]

May 31, 2012 Llandudno can take the credit or the blame for Margaret Thatcher deciding to enter politics. She was ... [More]

Left high and dry in Conwy

May 27, 2012 Today's frequent Conwy river cruises never run out of space for passengers, but in the heyday ... [More]