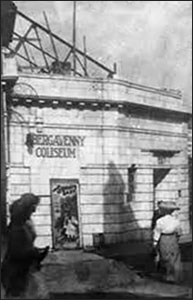 This building, a Wetherspoon pub since 2001, was originally a cinema. Abergavenny’s first permanent cinema was The Picture Palace, opened in 1912 in a Victorian corrugated-iron building on Park Road.

Before that, townspeople watched films in fairground booths or in local halls. One of the showmen involved in those screenings was Richard Dooner, who became a founding director of the Abergavenny Coliseum Company.

The company was registered in July 1913 and bought land here in Lion Street. JG Thomas & Sons built the 600-seat cinema. The old photo appears to show the building under construction.

The town’s mayor and corporation attended the opening night in November 1913, when the evening’s takings went to the Senghenydd disaster fund. Britain’s worst-ever mining disaster had occurred weeks earlier in Senghenydd, killing 439 miners. The cinema company later made donations to nursing associations in the area.

Men from the local workhouse were allowed to watch films here on Saturday afternoons. Workhouse women and children were admitted “occasionally”. During the First World War, wounded soldiers from Maindiff Court hospital had free entry twice a week. In 1914 the town council built a urinal at the back of the cinema for the Territorial Army!

The Coliseum’s manager, Walter Glover, would often give a commentary on the silent films, pointing at events on the screen with a stick! Sometimes a pianist or a small group of musicians provided musical accompaniment. Actors presented plays here occasionally, and the venue was also used for public lectures. The Coliseum Company built another cinema, the Pavilion, in 1928 on Monk Street.

In 1930 the Coliseum closed for a short time while its capacity was increased to 780 seats and a sound system was installed, enabling the new “Talking Pictures” to be shown. The new system was launched in October 1930 with the film The Rogue Song, featuring baritone Lawrence Tibbett.

Cinema attendances declined from the 1970s and the Coliseum was under threat of demolition by 1987, when the stalls were converted into shops with a small cinema continuing upstairs. The last film was screened in 1992, when bingo was transferred here from the old Pavilion cinema.