In memory of William Emlyn Hardwick 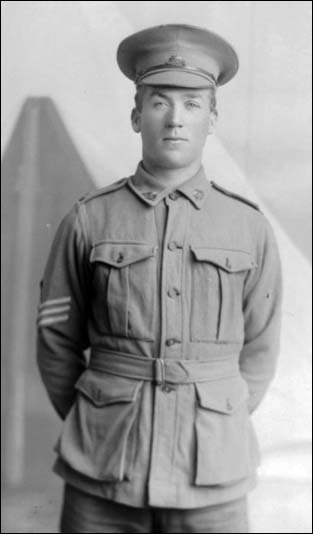 William Emlyn Hardwick was born in 1885. He was the third son of Thomas Hardwick of Avenue Road, Brecon. His mother Mary was listed as Mrs W Norman of 7 Mount Street, Brecon, in later records (Thomas Hardwick had died by then). One of William’s brothers was called Thomas. His sisters were Lilly Norman and Elsie Hill. William was as an apprentice carpenter for four years. He was a member of the Brecon Church Lads’ Brigade.

He emigrated to Australia, where he enlisted in January 1915. After joining the 21st Australian Infantry Battalion, he left the country in May 1915. While fighting in Gallipoli, he suffered an injury to his right ear. In 1916 he was Mentioned in Despatches for “distinguished and gallant services” with the Mediterranean Expeditionary Force.

He was promoted to Lieutenant in February 1917. Two months later, he was awarded the Military Cross for his conduct on the Western Front, described thus: “When his platoon was held up by fire from a mine crater he rushed forward with three men, killing two of the enemy and dispersing the remainder. He set a fine example of courage and initiative.”

His right elbow was wounded and he left his unit in May 1917. His left ear was damaged at the same time, leaving him hard of hearing and with fluid oozing from both ears. He was given home duties while recovering, and rejoined his battalion in France in August 1918. Soon after he was awarded a bar for his MC for leading forward a party at Hereleville, near Amiens, when the flank of an advance was hampered by machine-gun fire. He “drove the enemy from their position, captured a machine gun and six prisoners and established a post on the captured ground under heavy fire”.

He was killed in action in France on 5 October 1918 and buried at Tincourt New British Cemetery.