A woman was murdered in this building after her husband returned from the Boer War to find that she had had two children by another man during his absence.

The building belonged to William Mattick, and the London Restaurant occupied the ground floor. William Beavan moved into rented lodgings upstairs in August 1905, soon after returning from several years overseas with the King’s Shropshire Regiment. He had an exemplary 18-year army record. At other times he had worked as a tailor in Abergavenny.

He had left in 1900 to serve in the Boer War, where he received two medals. He regularly sent money home to his wife, Sarah Ann Beavan, and their two or three children. She had moved from Abergavenny to Newport to live with a Great Western Railway bridgeman called William John Cooke. She bore two children by him while her husband was away.

Mr Beavan wanted to set up a tailor’s business in Bloemfontein after the Boer War but his wife would not move to South Africe. He returned to Wales and visited her at Mr Cooke’s house several times to try to persuade her to return to him. Once he even slept the night upstairs in the house while his wife, aged 31, and her lover remained downstairs. He tearfully confided in his landlord, Mr Mattick, and said he would forgive her everything if she returned. 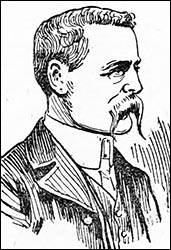 On 19 September he received an unexpected visit by his wife and one of their children, a boy aged six. They dined at the London Restaurant then went up to his lodgings. His wife continued to reject his request and scolded him for crying. He slashed her throat with a razor at about 4pm. She ran out, fell down the stairs and soon died in hospital

Mr Beavan’s trial was a sensational story for the press. The drawing on the right shows him in court. He was defended by a celebrity lawyer called Charles Mathews. He escaped the death penalty and was sentenced to penal servitude for life (imprisonment with hard labour). Many people thought this was unfair, considering the circumstances which preceded the crime. A petition was signed by 30,000 people including the local MP, the Bishop of Llandaff, the Lord Mayor of Cardiff, magistrates and councillors.

In 1910, an appeal was made to King George V on his accession to the throne. Weeks later, the Home Secretary recommended that Mr Beavan be released after 7.5 years.