Ruins of the Anglesey Barracks, Dinorwig

Ruins of the Anglesey Barracks, Dinorwig 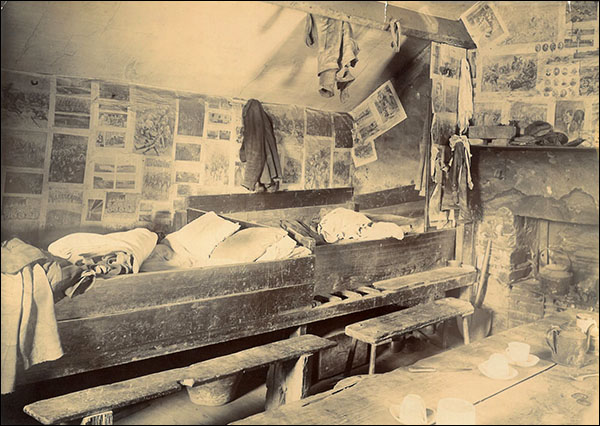 These cottages were built in the 1870s as housing for quarrymen who lived too far away to return home each night. There are two rows of 11 cottages built using granite blocks. These groups of houses were known as barracks. This one is called Dre Newydd or the Anglesey Barracks, because many Dinorwig quarrymen travelled from Anglesey. However, not all of the men who lived here were from Anglesey.

Men travelled from many communities in Gwynedd and Anglesey to work at the quarry. They usually returned home at the weekend. Barracks were built by the quarry owners to house these workers. The small two-room cottages had little protection from the elements, and living conditions were extremely poor.

Quarrymen living in the barracks visited Deiniolen, Dinorwig and Llanberis to attend religious meetings and relax in the village pubs. Deiniolen was known by the Anglesey workers as Llanbabo, after the village of that name on the island. 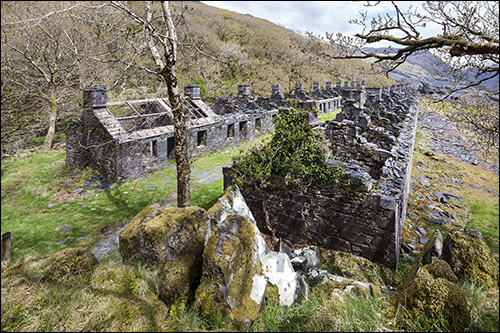 Modern photograph of barracks. Taken in May 2013.
© Crown copyright. RCAHMW

When the quarrying began in the late 1780s, most quarry workers were local. As the slate industry grew, workers began to travel from further afield. Initially they were housed in small huts spread across the quarry. These were often placed in unwelcoming and difficult-to-reach areas. One such site was the Aberdaron gallery – 600 metres or 2,000ft above sea level!

Dinorwig supervisor Gruffydd Ellis began the process of building new barracks on more suitable sites. The first was Yr Hen Dre, which consisted of seven cottages in a row. It was followed by Dre Newydd, here, in a lower part of the quarry.

You can discover more information about living conditions at the barracks on this web page.

On 14 March 1894 one of the Anglesey quarrymen met a violent death at his barracks. Hugh Roberts, 52, was trying to thaw a cartridge of dynamite for the day’s work when it exploded. His “head was shattered to pieces . . . and a large portion of the building was demolished”. The other residents had just left the barracks for work, otherwise many would have been killed.

Hugh was born in Aberffraw and lived in Llangristiolus, Anglesey, with his wife and six children. By 1891 he was a “rockman” at Dinorwig quarry, staying at the barracks during the week. After his death, quarry manager WW Vivian wrote to a newspaper to explain that Hugh had received all necessary instructions, in English and Welsh, about the dangers of dynamite.

Hugh’s widow, Margaret, buried her husband’s remains at Llangristiolus on 19 March. Just five months later she buried her daughter Elizabeth, 22, who died on 22 August after suffering from peritonitis for five days.

With thanks to Dr Hazel Pierce, of The History House, for Hugh Roberts information