This Calvinistic Methodist chapel, near Pendine beach, was built in 1896 and dedicated to Peter Williams (1723-1796). He had died a century earlier, after making major contributions to Christian publishing in Wales. 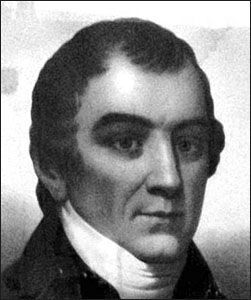 Peter (pictured left) was born near Laugharne. As a child, he was carried by his mother on her horse to Llanddowror to hear Griffith Jones, the famous preacher and social reformer. Peter himself became inspired while at Carmarthen Grammar School when he heard the preaching of George Whitefield. Soon after graduating he became curate of Eglwys Gymyn church and later established the Heol Dŵr Chapel in Carmarthen.

Peter travelled to many places to preach, including in the medieval Mariners’ Chapel in Laugharne, which had been taken over by the Moravian movement. That congregation moved to a chapel up the hill in the medieval village of Pendine in 1810, and the Calvinistic Methodists also used that chapel. Older houses still cluster by St Margaret's Church in the old village. The seaside part of Pendine developed later, in the 19th and 20th centuries, as tourism grew, so the 1890s chapel was built here.

Peter was often ostracised for his 'Methodist' style of preaching. His great contribution was to Welsh publishing through his edition of the Bible. By including observations of his own in it, he helped people to gain a deeper understanding of the scriptures. It also broke a copyright stranglehold, so it could be printed more cheaply in Carmarthen.

He is buried at Llandyfaelog, his final home. One year after the chapel was built, a resident of Peter's former home there presented the chapel with the candlestick Peter used when drafting his Bible notes. It is still held by the chapel.

With thanks to Peter Stopp, Haydn Wood and David Thorne, and to Pendine Community Council for funding this entry