Here the Wales Coast Path comes close to a towering stone wall, where the Britannia Bridge meets the Anglesey shoreline. From the outside, this abutment structure looks like solid masonry but actually it’s hollow. Notice the door which faces the Menai Strait. It’s for maintenance workers to get inside, where tall pillars rise from the earth slope. The pillars support arches. A pair of barrel vaults forms the roof, on which lies the railway trackbed.

The structure resembles the inside of a cathedral, hence it’s known as the cathedral abutment (original drawings refer to it as the “wing wall”). The photos show the view up the slope of the ground to the vaulted roof, and the view down towards the door. They were taken when Network Rail was reinforcing the abutment in 2011, after discovering vertical cracks. 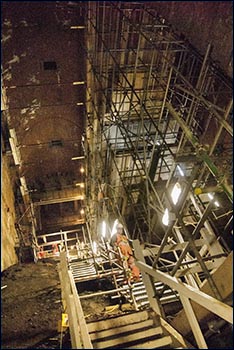 The bridge’s three stone piers are made of a similar cellular structure.

The cathedral abutment enables the bridge’s spans to be symmetrical. A long span to carry the railway from the Anglesey pier to the higher ground would not have been replicated on the Gwynedd side, where the land slopes more steeply. The original tubular spans were innovative, and provision was made for symmetrical chains to be installed for extra strength if needed (hence the piers extend far above the railway). 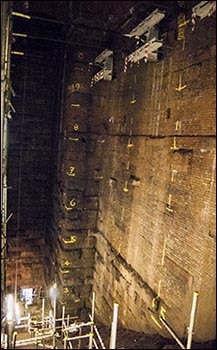 Building the piers and abutments in this exposed location was a large and dangerous task. Two men died after falling from the scaffolding – one was blown off by the wind – at this end of the bridge, in 1847 and 1848. The memorial to the workers who died in the bridge’s construction is by St Mary’s Church, c.250m west of the cathedral abutment.

The slender concrete piers between the abutment and Anglesey pier were installed when the bridge was rebuilt, with a road deck added, in the 1970s.

With thanks to the Royal Collection Trust for the old drawing