The road through the fields to Bodafon Farm Park was originally the route of the tramway which connected Llandudno to Colwyn Bay.

The top photo, courtesy of the L&CB Tramway Society, was taken from the top deck of a tram approaching what’s now the gateway beside Nant-y-Gamar Road. It shows a single-deck tram from Colwyn Bay approaching, having entered the fields at Bryn y Bia Road, Craigside. 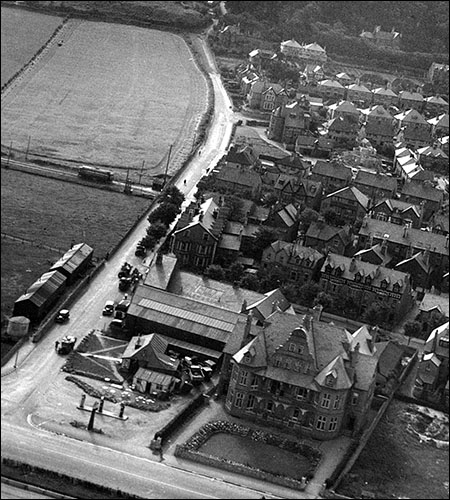 When the tramway opened in 1907, the section through Bodafon Fields was single track, with a loop near each end where trams in opposite directions passed each other.

The photo shows the later double track. Near the bottom centre is a sign prohibiting entry to the “private road”, approximately where you see the pedestrian gate today. In the bottom right corner is the edge of the waiting shelter for passengers. Only a few of the tram stops had their own shelters; elsewhere passengers waited in the rain or sheltered at nearby buildings. Most of the shelters were added or replaced in the 1930s using parts of the wooden bodies of scrapped trams.

The RAF aerial photo, courtesy of the Welsh Government, was taken in 1941 and shows this end of Craig-y-Don, with a tram setting off through Bodafon Fields.

After the Second World War, trams were timetabled in summer to run every 10 minutes between West Shore and Colwyn Bay throughout the day. To help accommodate the crowds travelling within Llandudno, an additional service ran from West Shore to here and back every 10 minutes. The empty tram would continue part way through the fields and use a crossover (connecting track) to switch to the westbound track for its next service from here to West Shore. 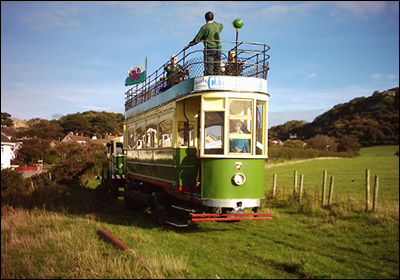 The track was lifted after the tramway’s closure in 1956. The western half of the tramway route through the fields now provides the public access to Bodafon Farm Park – follow the link below for visitor information.

The colour photo shows the replica tram body, constructed by the L&CB Tramway Society, at the far end of Bodafon fields in 2013. It was completed in 2007, using some surviving parts, to mark the centenary of the first public tram across the fields. It has been hauled on a road trailer along most of the former tramway route.

With thanks to the Llandudno & Colwyn Bay Tramway Society

Footnotes: Memories of the trams in Bodafon Fields

In 2022, Julie Pritchard, who grew up in Penrhyn Bay, recalled: “The best part of the tram ride was going through Bodafon Fields. That was always good, especially if you were at the front upstairs on a double decker. The tram used to go fast through the fields and move around a lot. It was wonderful.

“You had to take care when you got on and off because they swayed a lot as they went along.”

We're now online in two languages. Information about the RCA art gallery in Conwy is now available in Welsh as well as English. We hope to add other languages for selected HiPoints in the future. In some cases, the information will be tailored to people who read in that language. The next bit is in Welsh, by the way: Pe hoffech ddarllen yn y Gymraeg, cliciwch lle gwelwch:

History in the making in Conwy

Jan 31, 2012 At HistoryPoints.org we're used to dealing with facts from the distant past, but here we have a rare chance to record an event that happened today. The Albion pub, missed by some Conwy residents after it closed in 2010, reopened today, with its original 1920s features restored to their original appearance by a unique group of four breweries. We're raising a glass by adding The Albion to our HiPoints in Conwy.