In Memory of Charles Vernon Lewis 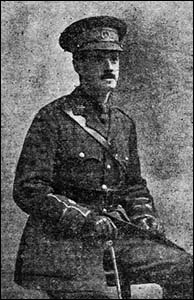 Charles Vernon Lewis was born in Conwy, the youngest son of Thomas Charles Lewis and CM Lewis of The Sycamores, Conwy. He had at least one brother and three sisters.

Vernon was educated at Rydal Mount School, Colwyn Bay. He became an apprentice with a firm of grain merchants in Liverpool, then worked for several years for his grandfather’s wholesale grocery business, Thomas Lewis & Co of Dean Street, Bangor. Later he took up a post with London tea merchant Harrisons & Crosfield.

He was a skilled footballer, playing for his school and Bangor Town FC. Quiet and “unassuming”, he had a large circle of friends and worshipped at St John’s English Wesleyan Church, Conwy.

He joined the Denbighshire Yeomanry during the South African war (1899-1902) but wasn’t called up to serve. Soon after the First World War began, he joined the 4th Manchester Regiment before being commissioned into the South Wales Borderers as a Second Lieutenant. He was soon promoted to Lieutenant. He was attached to a signalling school in Weymouth.

The marriage was brief. Vernon died, aged 32, at a Weymouth nursing home on 18 August 1915 after an operation for appendicitis. The Last Post was sounded when his body was placed on a train at Weymouth. Officers of the Dorsetshire Regiment accompanied the body to Bangor, and the regimental band played funeral music along the journey.

Vernon’s funeral was held at St Paul’s Welsh Wesleyan Chapel in Bangor. The “very imposing” procession from there to Glanadda Cemetery included a firing party from the 11th South Wales Borderers. Vernon’s coffin, draped in the Union Jack, was hauled on a gun carriage by a detachment of the Royal Garrison Artillery.

Back to listing on Conwy cenotaph page

Back to listing on Bangor war memorial page