The beach below the coast path here is where foreign soldiers landed in the last invasion of Great Britain, back in 1797. The invasion didn’t last long, thanks to local cunning and, it’s said, the discovery of copious quantities of alcohol, which the soldiers drank!

The drawing of Fishguard harbour in 1797 is shown here courtesy of Llyfrgell Genedlaethol Cymru – the National Library of Wales.

Britain and France had been at war for four years when four French warships arrived at Llanwnda on 22 February 1797. They had been dissuaded from landing at Fishguard port when gunners at the town’s poorly-equipped fort fired blanks. 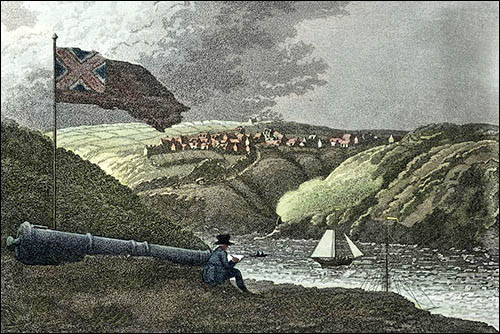 Arms, gunpowder and c.1,200 French soldiers came ashore. The invaders seized a local farm for their headquarters. Two Pembrokeshire aristocrats led c.600 local men to resist the French, who surrendered at Goodwick beach before the two sides had engaged in combat. The surrender document was reputedly signed at the Royal Oak. Six local people and soldiers had died in skirmishes.

The French had feared they were outnumbered after seeing what they took to be soldiers, dressed in red and wearing tall black hats. The figures were women dressed in local costume, including overgarments which were traditionally dyed red using a lichen which grew abundantly in the area. Jemima Nicholas, a cobbler’s wife, became a folk heroine for arresting 12 French soldiers, armed only with a pitchfork.

The American War of Independence played an indirect part too. The French landing force was commanded by William Tate, an American of Irish ancestry. He had fought against the British but fled America after being involved in a French attempt to seize control of New Orleans.

Thomas Knox, who led a group of local militia to fight the invaders, was the son of William Knox, formerly Britain’s last colonial under-secretary of state for America. William had made his fortune from using black slaves to grow rice in Georgia, where he lost his property when the USA became independent. After returning to Britain, he bought land in Pembrokeshire and a mansion in Llanstinan, near Fishguard. He continued to campaign against abolishing slavery, which he regarded as a way of converting African people to Christianity.

To aid the war effort, William had assembled the Fishguard and Newport Volunteer Infantry in 1794. Thomas Knox marched 194 of those men from Newport to Fishguard in response to the French invasion.

Local women celebrated the 200th anniversary of the invasion by creating a giant tapestry which tells the story. You can view it in its purpose-built gallery at Fishguard library.