The heart of the village may seem an unusual place to find former farmsteads, but there are two here at the bottom of Ffordd Bryn Fran. Villagers would routinely have seen, heard and smelled livestock!

The buildings south of the road, below Capel Ebeneser, were part of Tŷ Mawr Farm, which covered 0.13sq km (33 acres). In 1881, it was farmed by a young widow called Elizabeth Williams, aided by a labourer and a maid.

In the same year Llan Farm, the house opposite, was occupied by Evan Evans. He farmed 0.24sq km (60 acres) with the help of three employees. Later the farm was bought by Robert Foulkes, who had been a tenant farmer there. In 1910 the county council decided to make a compulsory purchase of the farm for its collection of smallholdings. Publicly owned smallholdings had been alleviating poverty in Britain since the 17th century by providing plots of land for poor people to cultivate. Legislation in 1907 and 1908 placed a legal duty on county councils to meet local demand for smallholdings and enabled them to buy land through compulsory purchase. 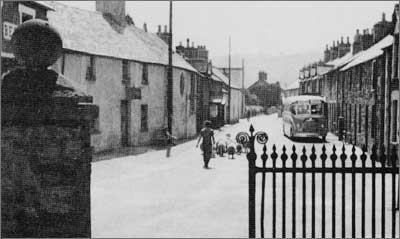 On the corner of Ffordd Bryn Fran (which translates as “Crow Hill Road”) and the main street is Llan Cottage, which was also known as Tŷ Cocyn. It was previously two houses, occupied at various times by a confectioner, a policeman, a tailor and a blacksmith who was also the local sexton (looking after the churchyard). From 1837 to 1869 it was the home of village schoolmaster Richard Beverley and his family.

In 1905, 64-year-old widow Jane Evans of Llan Cottage was given a place to live at Llanrwst’s almshouses. She had lived in Eglwysbach for 55 years, acting as agent for local newspapers. She was popular with young farmhands “who were glad, after their meagre fare at the farmhouse, to adjourn to Jane Evans’s comfortable fireside for her noted pies and cakes – and a little gossip”.