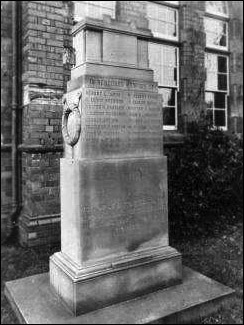 Plaques in the entrance hall commemorate County School pupils who died in the First and Second World Wars. The main war memorial on the premises is a cenotaph, on which are inscribed the names of pupils who died in both wars. See below for details of who they were. The old photo shows the cenotaph in its original location.

Some of the school’s staff joined the armed forces in the First World War. Assistant master R Michael Morgan MA became a lieutenant in the South Wales Borderers and was wounded in June 1918. In November 1916 the county council agreed a salary of £120 a year for his wife, who was doing her husband’s work at the school in his absence. She too was a graduate (BA).

Lieut Ernest Cecil Amos BSc, of the South Wales Borderers, was awarded the Military Cross for his valour in 1918. He had been wounded in action in France but lived until 1954. He was educated at the County School and was science master there when war broke out. His brother Albert, who is named on the County School's First World War memorial, was discharged from the army after being wounded in 1918 and died in 1921.

With thanks to Adrian Hughes and to Phillip Jones, author of ‘Early Birds and Boys in Blue’ (a history of Radnorshire airmen)