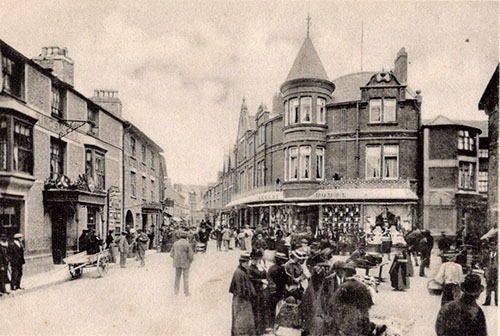 This building, now home to Tŷ Asha Balti House, was once a draper’s shop called Regent House. The curved frontage and the tiled floor outside the entrance date from a rebuilding in 1902.

Regent House was the tallest building in Llanrwst, and was therefore used in the early 20th century by the local fire brigade for “fire escape practice”. The photo dates from that period and shows Regent House on the right, with the King’s Head on the left.

The draper here at that time was William John Williams, who also supplied the local workhouse with shirts, coats and vests. He was a magistrate, Liberal councillor and chairman of the urban district council.

One of his children, Richard J Williams, married Jennie Hughes of Betws-y-coed in 1906. After the ceremony in Llanrwst they left for the USA. Richard – known in Llanrwst as “Dick Regent” – became manager of the carpet department in a large store in Los Angeles. While living in the USA, he wrote cinema scripts in his spare time. He recalled later that one of his scripts, titled Charlie Chaplin Enlists, was accepted by Charlie Chaplin himself.

Richard returned to Llanrwst in 1933 and entered the building trade. One row of houses which he built is called Regents Park – a reference to his father’s shop. He died in 1946, aged 73.

Richard’s sister, Miss Lil Williams (sometimes known as Lel), tended casualties at a military hospital in France for three years. She returned to Llanrwst in August 1919, 10 months after the First World War had ended. She was also noted locally for her singing talent.

Apr 9, 2012 The historic community orchard in Conwy is our first HiPoint where information is available in Russian. Thanks ... [More]