If you’ve just scanned the QR codes near Soldier’s Point, notice how the road to the west runs straight and under a minor road bridge. This was originally the route of a broad-gauge railway.

Constructing Holyhead Breakwater, from 1847 onwards, took more than 6 million tonnes of stone, quarried at Holyhead Mountain. Initially horses hauled the stone. Many of them, and their wagons, were lost as a result of horses taking fright on approaching the sea. 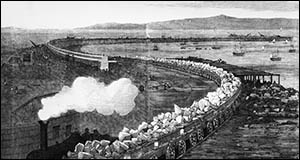 Later the quarry and breakwater were linked by a broad-gauge railway with 213cm (7ft) between the rails (pictured right, from the London Illustrated News). The wagons emptied not through the usual side or end doors but through their floors. The stone would then fall through gaps between the rails. The choice of broad gauge enabled the openings in the wagons and track to be wider than standard gauge would have allowed, so larger rocks could be carried.

At Soldier’s Point a track diverged to run along Newry Beach to Salt Island, in readiness for construction of an eastern breakwater (never built).

In 1913 the line and its resident steam locomotive Prince Albert were converted to standard gauge. The loco resided in the engine shed and railway workshops – the building to your right as you scan the QR codes. In 1940 the Royal Netherlands Navy requisitioned this as a store, ousting the resident loco Crowhurst (bought in 1934) to a small shed at the quarry.

In the British Rail era, the railway was worked by extra-small Class 01 diesel locos built in the 1950s and withdrawn in 1980, when large slabs from Penrhyn slate quarry, Bethesda, were placed on the breakwater’s seaward side. The railway was no longer needed because a diesel crane was purchased to replace the deteriorating breakwater crane, which had lifted stone from the railway wagons.

You can see short sections of standard-gauge track leading towards the entrance of the engine shed and near the start of the breakwater.

With thanks to Graham Van Weert of Holyhead Maritime Museum

Apr 9, 2012 The historic community orchard in Conwy is our first HiPoint where information is available in Russian. Thanks ... [More]