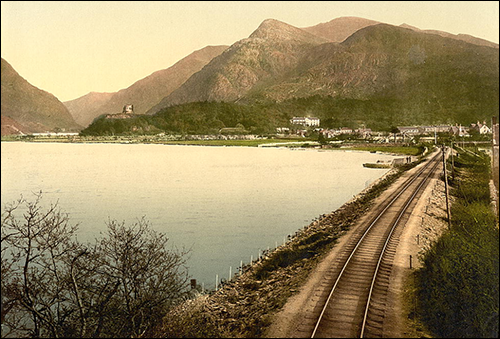 This tunnel was created in the 1860s for the London & North Western Railway’s branch line to Llanberis from Caernarfon. As you walk or cycle through, notice that the tunnel proper is hewn from solid rock, and needs no supporting lining of brick. The arch at the Llanberis end is actually a bridge, joined on to the tunnel. It carries the main road over the railway route.

Many tourists came to Llanberis on the train. Perhaps you can imagine their excitement as the train left the tunnel and they got their first clear views across Llyn Padarn to the dramatic mountain scenery of Snowdonia. The picture shows the railway line skirting the lake shore near Llanberis in the 1890s.

The main reason for building the railway was to transport slate from the quarries near Llanberis. There was already a narrow-gauge railway on the opposite shore of the lake, but that was designed to take slates to the dock at Y Felinheli (then known as Port Dinorwic) for onward transport by ship. The LNWR’s line was connected to the main rail network, and wagons loaded in Llanberis would travel direct to the towns and cities where roofing slate was needed.

Road transport took over from the 1930s, and the last freight train left Llanberis in September 1964. Today Lôn Las Peris follows the railway’s trackbed from the tunnel to the lakeside car parks. West of the tunnel, the trackbed was reused in the 1980s to build the new A4086 road.