This corner building, now home to the National Cycle Museum and various organisations, was built for local transport entrepreneur Tom Norton in the early 20th century. Look up to see the name of his company in large letters along the facade, interspersed with “Cycles”, “Motors” and “Aircraft”. The side facing Princes Avenue also displays “Accessories”.

The building is an early example of architecture using concrete and steel framework. The first part was completed in 1911. An extension, about twice the size of the original, was added in 1919. The frontage features large windows surrounded by faience, a type of glazed tile. 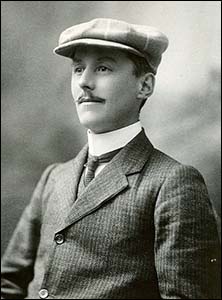 Tom Norton - pictured right courtesy and copyright of the Radnorshire Museum - began selling bicycles in 1899 at a rented shop in High Street. With the help of younger brother Jack, he branched out into motorbikes and cars. He launched one of Wales’ earliest public bus services in 1906 and eventually became the Welsh dealer for Ford and Austin cars and Ferguson tractors.

In 1917 the Government, striving to improve wartime food production, appointed Tom organiser of the “motor tractor ploughing scheme” for Wales. There were just three tractors in Wales, and the scheme aimed to work them as hard as possible during the ploughing season, with technical support from local motor traders. In the same year, Tom and his wife opened a war hospital at their home, Fronheulog, in Ithon Road.

Tom also chaired the local military tribunal at County Buildings which decided whether men should be granted exemption from military service during the war.

By 1919 Tom’s company was known as The Automobile Palace Ltd and had outlets in North Wales. The word “Aircraft” on the 1919 section of the building is a relic of Tom’s attempts to promote aviation locally. There was an airfield near the Rock Park Hotel which hosted flying displays. Flights to London and other cities were available in the 1930s.

Tom was a leading light in the South Wales and Monmouthshire division of the Motor Trades Association. He died in 1955, aged 85.