The house called Preswylfa was used by the Midland Bank as its local branch – but only one day each week! The cashier would arrive in the village with a security guard, who was usually of pensionable age. Customers would ring a bell and be shown to the front room, doubling up as the cashier’s office. 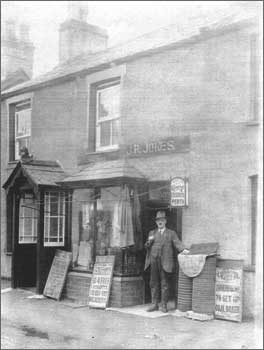 Further to the right, house no.3 (Min Awel), was was known as Tŷ Pwmp (“Pump House”) because the village’s water pump stood in front of it from c.1860 until mains water was laid on in the late 1940s. Villagers collected twice as much water on Saturdays as on other days, because fetching water on a Sunday would be tantamount to working on the Sabbath

The water was pumped from a spring known as Ffynnon Asa (“Asa’s Well”). Before the 1860s, villagers had to walk from the well with their filled pails. The pump was rediscovered and placed on public display in the village cemetery in 2015.

To the left of Preswylfa is Stanley House, once a shop which sold daily newspapers, including the North Wales News and Visitors’ Chronicle, Y Faner and Y Genedl Gymreig. In the early 20th century the most popular title here was the Daily Herald, a left-wing paper which opposed the First World War.