This building dates from the mid-19th century and was named after Queen Victoria. It was built on a corner plot in the Italian stucco style, which was fashionable in Britain at the time. The builder was Henry Pearce Bolt, a Newport mayor in the 1870s. Two streets in the city are named after him. 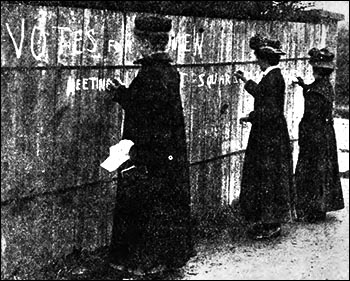 The open area outside the hotel became known as Queen’s Square. One evening in June 1908, a large crowd gathered in the square to listen to speeches by two suffragettes (campaigners for women to be allowed to vote in elections). One was Nellie Crocker, who had been secretary of a Liberal Association in Somerset until 1907, when she went “on strike” in protest at the party’s lack of support for women’s votes. She then joined the Women’s Social and Political Union (WSPU). She is on the right in the photo of women publicising a suffragette meeting in Herefordshire in 1908.

She told the crowd at Queen's Square that the women of Newport were preparing a banner for a major suffragette demonstration in London’s Hyde Park.

In 1909, she was one of a group of 13 suffragettes who were imprisoned for six weeks after being part of a deputation to the Prime Minister, Herbert Asquith, in London. She went on hunger strike in prison after one of her later arrests.

The other suffragette who addressed the Newport meeting was Mary Keegan, a former actress. She was also imprisoned after trying to present Asquith with a resolution on women’s votes.

Five years after the meeting, Margaret Haig Mackworth was imprisoned for an arson attack on a post box in Risca Road, Newport. She was secretary of the WSPU’s Newport branch. Her father was a Liberal MP (eventually Viscount Rhondda of Llanwern) who had amassed a fortune through industrial ventures. He was sympathetic to the women’s suffrage movement, and his wife held a suffrage garden party in 1909 at their home, Llanwern Park.

After his death in 1918, his title and businesses passed to his daughter. In 1922, she won a sex discrimination case to be allowed to take her seat in the House of Lords, but the decision was quickly reversed. Viscountess Rhondda died in July 1958, three months before female peers were first admitted to the House of Lords.