In Memory of Ivor Jones 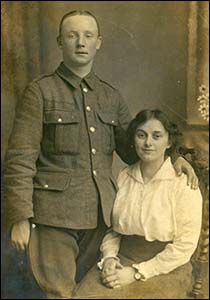 Ivor Jones was born in Pontllanfraith, in the South Wales Valleys, and enlisted in the army at Newport recruiting office, writes Adrian Hughes. He was posted to the 16th battalion of the Royal Welsh Fusiliers and sent to Llandudno in North Wales where the battalion had been formed soon after the war had begun in 1914.

While training in the seaside town, Ivor met and fell in love with a young local woman, Ann Harrison of Craig-y-Don. They married in 1915.  In August 1915 Ivor left his young bride in Llandudno when the battalion moved to Winchester to continue their training. In December 1915 he arrived in France.

During the first battle of The Somme in July 1916, the 38th (Welsh) Division, including Ivor’s battalion of Royal Welsh Fusiliers, were ordered to clear the enemy out of Mametz Wood. In carrying out their duties, c.4,000 Welshmen were either killed or wounded.

Ivor was severely wounded during the Battle of Mametz Wood and died, aged 22, three days after the battle had ended. He never saw his baby daughter, Elizabeth, who was born on 6 May 1916. Ivor was buried at St Sever Cemetery and is commemorated on the war memorials at Pontllanfraith and Llandudno.

With thanks to the Royal Welsh Fusiliers Museum, Caernarfon