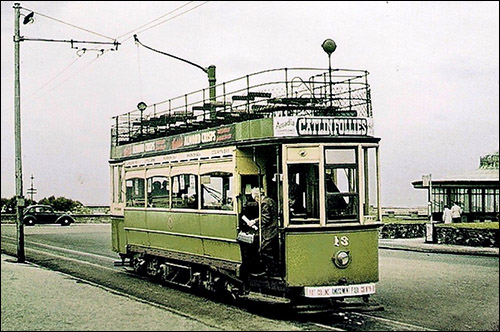 This unusual circular shelter was used for many years by people waiting for trams on the Llandudno & Colwyn Bay Electric Railway. The tram track was some distance away, on the far (southern) side of the grassed central reservation along Gloddaeth Avenue.

The tram service began in 1907. For a few years, the tramway to Colwyn Bay began at Dale Road, c.150 metres south of Gloddaeth Avenue. This track – the first part of an extension to Deganwy which never got past the planning stage – was soon abandoned, and for most of its existence the western terminus was near the circular West Shore shelter. The tramway closed in 1956.

The shelter was probably constructed in 1929. The land in this area had been given by the Anglican church to the Llandudno Improvement Commissioners in 1893 with a covenant that no “building or erection whatever” should ever appear on the land.

In February 1929 the church commissioners gave written consent for the local council to erect on the land “a shelter for the protection of the public against wind and rain”.

By 1929 public buses had become a major form of transport. Services from Llandudno used the roads encircling the shelter to turn around prior to their next journey. There is no mention of buses or trams in the church document, but the shelter’s shape and position – some distance from the sea – suggest that the council primarily had passengers in mind when it built the shelter.

The upper tram photo shows the shelter on the right as double-deck tramcar no.13 waits to begin its journey to Colwyn Bay. 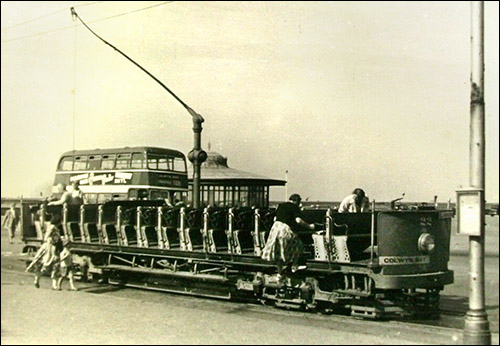 The lower tram photo shows a bus picking up passengers beside the shelter, opposite an open tram – a type known as a “toast-rack”! The woman nearest the camera displays the athleticism needed to board these vehicles. Both photos are shown here courtesy of the L&CB Tramway Society, which records the tramway’s history and is restoring original and replica tramcars.

Footnotes: Memories of the “toast-racks”

In 2022, Gwyn Pritchard recalled: “At the terminus they used to turn the seats around on the toast-racks to face the other way. They also turned the trolley [the electricity collecting arm] the other way around.”

His wife Julie recalled: “We loved the toast-racks. The conductor used to go along the outside to collect the fares. We hated the visitors coming in the summer because they would fill the toast-racks up and we couldn’t get on at our stop in Penrhyn Bay. We had to wait for the next tram.

“My mum used to say, ‘Let’s go to West Shore.' Tram fares were very cheap. We would have a lovely ride to West Shore and sometimes we would stay on and go all the way to the terminus in Colwyn Bay and then back to Penrhyn Bay.”