This pub occupies a row of cottages built in the 18th century or earlier. The inn was originally in the westernmost cottage only. The original pub kitchen, behind the door marked “Pump Room”, still contains a well, no longer used for water. In 1875 a local historian recalled that the pub was once known as Arwydd y Llong (“The Sign of the Ship”). By then it was known as the Quay Inn. 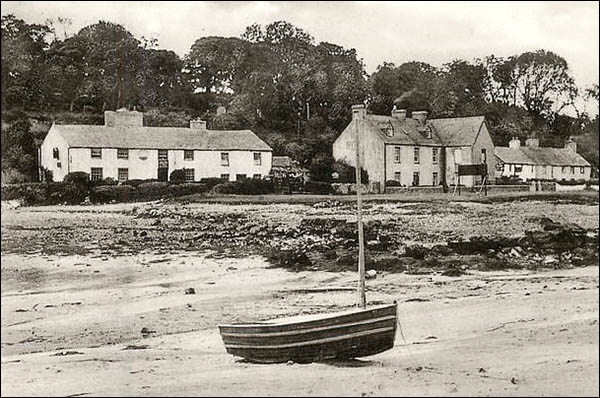 In 1868 another historian wrote that the Quay Inn was the birthplace and childhood home of Thomas Jones, known as Twm Sion Twm, a giant of a man who had the “strength of Samson”. When the inn needed a new handle, Twm reputedly bent one from a large iron poker with his bare hands. It was said that he once pulled a stuck cart from the mudflats at Red Wharf Bay after three horses had failed to do so!

Twm was noted for his poetry as well as his great strength. In September 1754 a youth called Bob Owen arrived at Red Wharf Bay to learn Welsh from Twm. He had been sent there by his father, the poet Goronwy Owen (1723-1769), who was Twm’s contemporary.

One of the inn’s earliest tenants was mariner Richard Roberts. He and wife Elizabeth are named in records from 1754.

In 1821 a banquet was held at the pub to celebrate the launching of the latest ship to be built at Red Wharf Bay. This was the Lady Robert Williams, a brig of 156 tonnes.

In 1864 the Quay Inn was “tastefully decorated” to celebrate the coming of age of Anne Jane Williams. Her family owned large amounts of land in the Red Wharf Bay area, and lived at a mansion called Tan-y-Graig. Tenants and other well-wishers gathered at the inn and marched, behind a brass band, to Tan-y-Graig and back.

By the early 20th century the pub was called the Ship Inn and was kept by Emma Capon, who lived with her brother John and his wife Ellen. In 1914 Miss and Mrs Capon led fundraising events to help pay off the remaining debt, c.£36, for the recent restoration of Llanbedrgoch parish church. By then the opening of a railway branch line to Red Wharf Bay in 1909 had largely put an end to ships docking at the quay, although one ship arrived each spring with farm fertiliser.

The Ship Inn has been run by members of the Kenneally family since 1971. Some people believe the building is haunted, particularly the original inn.