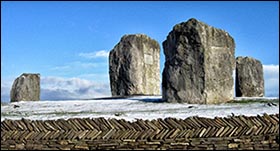 The large standing stones here were erected in memory of Aneurin Bevan, founder of the National Health Service, following his death in 1960.

To hear how to pronounce Aneurin, press play: or, download MP3 (12KB)

The central stone represents Bevan, who was MP for Monmouthshire’s Ebbw Vale Division from 1929 to 1960. The other three stones are arranged to point towards Ebbw Vale, Tredegar and Rhymney – three of the main towns in his constituency. Bevan used to give open-air speeches to his constituents on this hillside. It was a relatively easy place for people to reach on foot from the Ebbw Vale or Tredegar areas before the era of mass car ownership.

Bevan was born in Charles Street, Tredegar, in November 1897. He was one of 10 children born to David and Phoebe Bevan. David was a miner and avid reader. Young Aneurin had a speech impediment and wasn’t happy at Sirhowy School, Tredegar. He left aged 13 and began working in Tŷ Trist Colliery in 1911. The colliery was close to the site now occupied by Tredegar Comprehensive School.

In his spare time Bevan educated himself at the town’s Workmen’s Hall, which had a large library, and became the local lodge chairman for the Miners’ Union in 1916. He loved walking, especially on the moorland around the village of Trefil. He overcame his speech impediment by reciting passages of literature and rehearsing his speeches aloud while he walked. He developed a huge vocabulary and whenever he got stuck on a word he selected another, thereby overcoming his impediment.

In June 1918 he was summoned to explain why had not enlisted to fight in the First World War. His lawyer said that he suffered from nystagmus, an uncontrollable movement of the eyes.

The Tredegar Iron and Coal Company dominated life in the area at the time. Bevan steered a local socialist discussion group, called the Query Club, towards challenging the company’s power. He was elected to Tredegar Urban District Council in 1921. His election as a Monmouthshire county councillor in 1928 was followed a year later by winning the Ebbw Vale Parliamentary seat for Labour.

He led the formation of the NHS while Minister of Health from 1945 to 1950. You can read more about his career on our page about his statue in Queen Street, Cardiff. Follow the link below to download a leaflet about the Aneurin Bevan Trail.