The SSE SWALEC can hold only a small fraction of the people who take an avid interest in cricket. Those who aren’t fortunate to hold match tickets can stay informed through media coverage.

Glamorgan Cricket are proud to have a state-of-the-art Media Centre with a suite of television and radio studios. There is also an extensive area for the written press with over 100 seats, arranged in tiers so that every journalist has a clear view of the playing area. Within the media centre is a presentation room and large commentary box specifically for Sky TV which, during the 2015 Ashes test match, had 43 camera crews operating at the stadium! 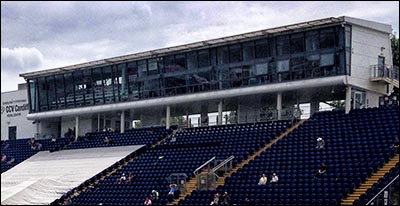 The Media Centre at The SSE SWALEC

Before the advent of broadcasting, fans relied on the press for coverage of matches. The very first match reports were published in June 1889, soon after Warwickshire had beaten the new Glamorganshire team at the Cardiff Arms Park by eight wickets. Mr Docker, of the visiting side, was not out at the end of the match. Without leaving his wicket, he arranged with Mr David, the home side’s captain, to continue his team’s inning for exhibition purposes. “The decision, it need scarcely be said, was received with a cheer from the crowd,” reported the South Wales Daily News.

The QR codes for this page are at position no 4 (shown in red) on the map below.