In memory of David Vincent James 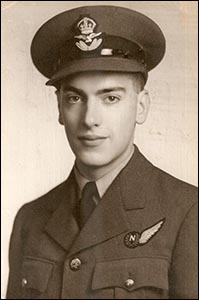 David was the only son of William Charles James and Mabel Alice James, writes Phillip Jones. William was a watchmaker in Builth Wells.

After joining the RAF, David was posted to Canada for further training and became a navigator. After returning from Canada, he was paired with Flying Officer Robert William Evans of the Royal Canadian Air Force. They continued their training, flying Mosquito aircraft.

On 25 November 1944, the pair flew in Mosquito LR 384 on a night map cross-country exercise over southern England. The weather was cloudy in some areas, and the plane eventually flew slightly off course.

The Mosquito began to fly erratically when over Dorset, diving from 600 metres (2,000ft) to 150 metres (500 ft) before climbing rapidly to 240 metres (800ft). It then overturned and dived steeply into the sea near Bridport. Both men died.

David was 21 years old and Robert 26. Their bodies weren’t recovered from the sea. Both are commemorated on the RAF memorial at Runnymede, Surrey. The official court of inquiry noted that the most likely explanation for the aircraft’s loss was that the pilot lost control while trying to work out his location.