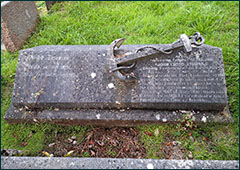 This finely carved headstone marks the resting place of John Lloyd Thomas of Dinmor, Penmon. He served with the Royal Navy between 1884 and 1911, becoming its Deputy Surgeon General.

Born in September 1856, he received his medical education at the Middlesex Hospital and Queen’s College, Birmingham, before becoming a surgeon at Queen’s Hospital in the same city. He entered the Royal Navy Medical Services in 1884 and saw service with the Home Fleet and in the Mediterranean.

There was an outbreak of yellow fever while he was serving at the Naval Hospital, Jamaica, in the early 1890s. He was commended for his work and for an essay he wrote about the treatment of the victims of the epidemic.

John was next sent to China, where he helped set up a hospital for wounded Chinese servicemen in Yantai (then known as Chefoo) during the Chinese-Japanese War. That work was recognised by the Imperial Chinese Government, which awarded him the Grand Order of the Double Dragon of China of the First Division, Third Class.

He was back in the Far East in 1899 and was with British forces during the “Peking Expedition” of 1900. The brigade’s robust health was attributed to his work, although ironically he contracted a debilitating condition which considerably shortened his life.

On returning to Britain he had to take a prolonged period of sick leave before returning to service at Chatham, Bristol and Liverpool. He retired in 1911 to Anglesey, where he served as High Sheriff before his death in June 1913.