This 18th-century building was originally a wool market. Its position beside the Old Quay was convenient for loading newly purchased wool onto ships. A plaque on the building, dated 1777, commemorates the quay’s reconstruction. The picture of the river and quay c.1830 is shown here courtesy of Llyfrgell Genedlaethol Cymru – the National Library of Wales. 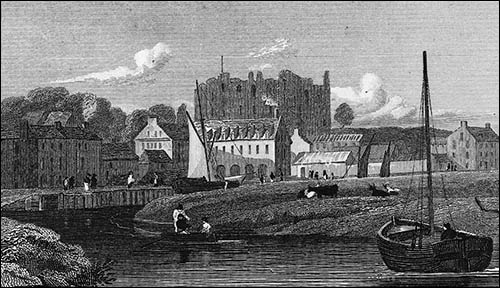 The other end of the building faces Quay Street, where wool could easily be offloaded from carts which arrived from farms in the surrounding district. The town council appointed individuals to collect the tolls of local markets. In 1841 a John Hudson and his colleague at the wool market collected £7 in tolls.

Navigation along the Western Cleddau river as far as Haverfordwest was vital to the town in medieval times, when Norman and Flemish people settled here. The archdeacon and writer Gerald of Wales (c.1146-1223) noted that Pembrokeshire’s Flemings (from Flanders, Belgium) were skilled in the wool trade. South-west Wales became noted for its Flemish weavers and their descendants.

In the early 17th century, there were concerns that wool merchants were striking secret deals for Pembrokeshire wool and carrying it off it to “obscure places”. That deprived local textile workers of raw materials, so new rules made Haverfordwest, Tenby and Pembroke the only approved places for wool sales in the county.

The arches you can see on the ground floor of the Old Wool Market may have been open originally and closed up later, perhaps when the building became a warehouse. The wool market moved to the new Corn Market House in 1851. The old market building was later rented out to tenants by the Borough of Haverfordwest.

The building has been used as offices for various organisations. Haverfordwest Town Council moved in in December 2020.